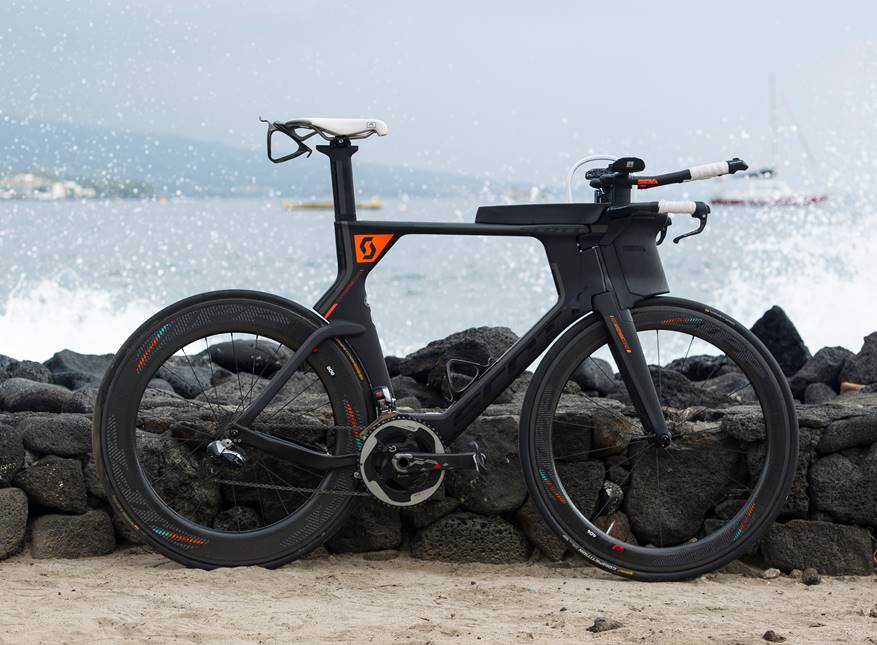 When Sebastian Kienle ripped up the bike leg at the Ironman European Championship in 2014, riding 10 minutes faster than anyone had ever gone on the course, his performance sent a clear message to the rest of his competition: he would be the man to beat in Kona later that year. Turns out he was, once again, flying through the bike course and following that up with a strong marathon to take the world title. As much as those wins were attributable to Kienle’s immense talent, it was hard not to notice his bike, the Scott Plasma 5, which looks fast on the rack in transition and looks even faster being ridden at 45 km/hour by the speedy German.

For over a decade, Scott has been producing some of the fastest and lightest carbon-fibre bikes on the market, and the Swiss company’s latest high-end tri frame, the Plasma 5, is the fastest of the lot. The Plasma 5 uses HMX carbon fibre that is stiffer and more responsive than that used in previous versions of the Plasma line. Thanks to input from athletes like Kienle, the idea was to develop a bike that handled as much like a road bike as possible, while also offering the ultimate in aerodynamics.

Speaking of aerodynamics, there’s a reason that so many new frames this year look remarkably similar to the Plasma 5. The Plasma 5 is incredibly good at cheating the wind thanks to the parametric airfoils which are said to provide the same aero numbers whether a rider is on or off the bike. That’s a huge plus – it is one thing to have a bike that tests really well in a wind tunnel, but it’s another to have it perform well when you’re on it. The Scott engineers didn’t stop with the frame, though. The ergonomics of the Plasma 5 are impressive. Aerodynamics in tri bikes all begin with the aero bars, which in this case were built for Scott by the folks at Profile Design. In keeping with the latest aero trends, the arm rests and extensions are raised up off the base bar, and every aspect of the bar set-up (including the ski-bend extensions) can be adjusted to dial in the perfect fit.

But it doesn’t stop there. One of the biggest aero features on the Plasma 5 is the integrated handlebar water bottle, which allows the rider to access fluids without having to move off the bars (and lose valuable seconds), all the while reducing drag appreciably. Along the top tube is a storage box that not only carries lots of nutrition, but also allows wind to pass behind the stem to improve aerodynamics. (If you happen to be heading to a UCI time trial event you’ll have to remove the water bottle and storage box and also change the stem.) The brakes are hidden, too, thanks to the TRP front brake and the Dura Ace direct-mount rear brake that’s sits under the bottom bracket and even has a special plate that improves the aerodynamics. Suffice it to say the bike is a rocket. We tried to get one in for review, only to learn that the last available frame in the country was on its way to Oakville, Ont., for Joe Wiley, who had qualified for Kona at Ironman Lake Placid. Luckily enough Wiley agreed to let us photograph his bike, and gave us lots of feedback for  our review. 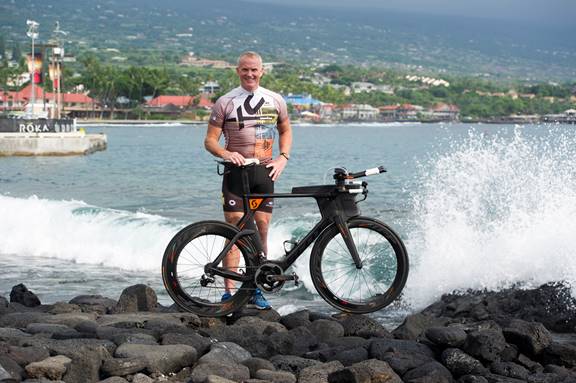 Wiley started with the Plasma 5 frame and then specced it to create the ultimate speed machine. Dura Ace Di2 provides sharp, smooth shifting and all the wiring can be hidden within the frame. The wheelset he chose was Zipp’s 808s for both the front and rear (discs aren’t allowed in Kona).

Wiley agrees that the bike is a rocket, climbs extremely well and also handles admirably, especially for a tri bike. His fit was dialled in almost right away, providing a comfortable, aero ride that allowed him to spend lots of time on the aero bars – exactly the dynamics required for a great ride in Kona. That’s not to say he didn’t have some issues. The biggest challenge was around the rear brake, which was hard to set up. A former football and rugby player, even at his most slimmed down, Wiley weighs about 180 pounds, which means he generates some pretty decent torque when he’s standing up and pounding on the pedals or climbing. Even the super-stiff 808s moved around a bit in those situations and the tight spacing for the rear brake led to some brake rub. A few weeks of tinkering finally got things in order and Wiley arrived in Kona ready to take on the famous Queen K highway with its high winds. Before the race he made one final tweak to the setup, changing the front wheel to a shallower 404, which made the bike considerably easier to handle in the strong winds along the Kohala coast.

He might not have ridden his Scott Plasma as fast as Kienle did on race day, but Wiley was able to enjoy all the aero benefits and performance built into this impressive frame, proving that Scott has built a winning bike that works for athletes of any level.