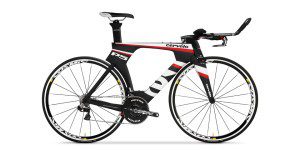 Customers who have bicycles fitted with 3T Aduro bars should stop riding them at once and contact your local Cervélo retailer to perform a safety check.  The aero bar needs to be disassembled in order to identify if it is affected by the safety measures or not.The Aduro bar is characterized by its unique design tailored to fit the Cervélo P5 bike.