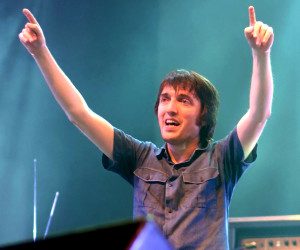 Radiohead bassist Colin Greenwood has entered the Blenheim Palace Triathlon in Woodstock, England near where he grew up. The rockstar announced the move on Twitter and explained he will be racing to raise money for the charity Scarlett’s Dragons, which supports leukemia and lymphoma research. Greenwood’s support is in honor of a friend’s daughter who is battling Leukaemia. He will be part of a team of over 20 people taking part in the fundraising campaign which has already raised £13,208.00 towards the target goal of £50,000.00.

The event features multiple race formats and takes place over June 7 to 8 at the Blenheim Palace, in Woodstock, England.

In his recent posts Greenwood explains:

“In a moment of madness I’ve agreed to enter a triathlon for my mate Dan’s daughter Scarlett – https://www.scarlettsdragons.co.uk Sponsor me! xcolin”

“Just got back from 10k stagger around the park – amazed by your kindness and support already! Go Scarlett !! #scarlettsdragons”

To find our more about Scarlett’s Dragons or to make a donation visit:www.scarlettsdragons.co.uk You can follow or support Colin on Twitter @colingreenwood