I drove from Poway to Henderson, Nevada, home of the Ironman Silverman 70.3. The day of the race called for strong winds but cooler conditions. The swim was non-wetsuit but the waves were massive. After a good warm up, the field of 30 men lined up. I lined up beside my Triathlon Squad teammate Jason Pedersen who was doing his first 70.3 race. After a few light-hearted words with him, the count-down started. The gun went off and the water exploded as all of us took off. I was able to find a group of swimmers and hide from the waves for a while. Eventually Cam Dye and Michael Raelart pulled the swim apart and I was stuck chasing the group solo. Out there alone in the lake I felt the waves crashing into me. All I could do was take the beating and keep my arms turning over.

When I came out of the water I noticed that the person I had been following was Jason. As I ran into transition I heard that I was two minutes and 30 seconds down from the leader and in thirteenth place. I was not pleased to hear that number, but I put it in the back of my mind and stuck to my bike and run plan. I jumped onto my Cervelo and started to get into my power zone. Jason took off like a rocket and it was very hard not to go with him. The bike course was very windy and hilly, through a spectacular landscape. As we rode through the desert, the wind gusts blew my bike all over the road and I was happy that I chose to ride a disc wheel. I slowly chipped away at my deficit. At 45km Cody Beals went by me like I was standing still. I let him go and do his own thing. By the end of the bike I had worked my way up to sixth place. But, unbeknownst to me, Michael Raelart had been disqualified for drafting on the bike, so in fact I was moved up to fifth place.

I quickly got my Saucony run gear on and started in on the hilly course. I had felt solid on the bike, but I felt like I was floating on the run. The course was three laps and essentially either up or down. When I had started the run I had heard that the leaders had  four minutes and 30 seconds on me. I worked hard on the down-hills and hit the up-hills very strong. By the first lap I had worked my way up to third place and was chewing into the lead. I over-took Cody Beals, who was in second on the second loop, and finally, at 16 km I ran down Cam Dye. Once I had made that move, I put it into overdrive to make sure I did not lose it. When I crossed the finish line I thought I was in second place since Michael Raelart had continued to race. I was so happy with second, but when I found out I had won I was over overjoyed. This was my first Ironman 70.3 win. 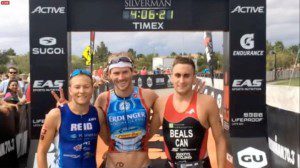 I am now back in Poway, California training for Miami 70.3 in a few weeks.

This win did not come without a lot of support: Thank you to all my sponsors: C3, Kinetico, Royal Containers, Caledon Hills Cycling, Saucony, Nineteen, Compressport, SMITH Optics, Vorgee, Polar and Awake Chocolate.