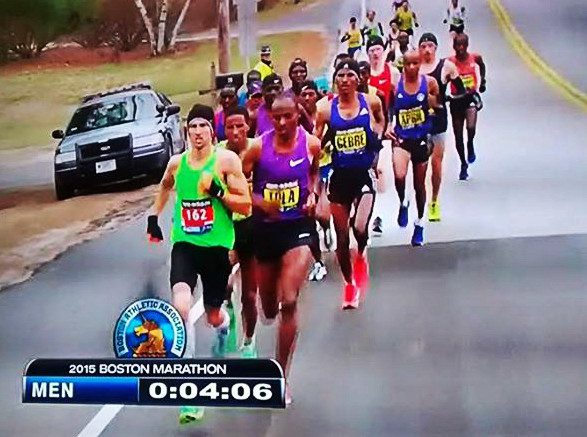 Fort Worth Texas resident and pro triathlete Derek Yorek led the early miles of Monday’s Boston Marathon. According to his interview with Ben Hobbs at tstriathlon.com, Yorek sprinted a 4:27 first mile to lead off the front pack of guys. While broadcasters had fun predicting his immanent fall off pace, Yorek, a talented runner with a 10 km PB of 29:37, knew what he was doing for his few moments of fame. On April 17, Yorek posted the following message on his Facebook account stating his intention.

“Ok Facebook peeps…the #bostonmarathon is on Monday and I’m going to try and lead the thing as long as possible! Having only been running 3-4 times per week and never running over 25 miles in any given week for the last 6 months, I’ll set the over/under at 3 miles…comment how far YOU think I can go (if at all!). (Feel free to share)”

After averaging 5:15 miles for the first 3 miles of the race, Yorek struggled to finish in 3:04:57 dropping his average to 8:05 minute miles.