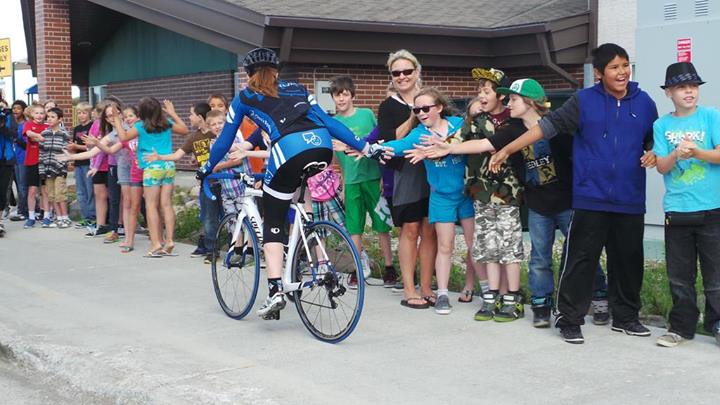 On Jan. 28, Bell Media will premiere Clara’s Big Ride, a documentary on Clara Hughes’s 2014 cross-Canada ride to raise awareness for mental health. The ride started on March 14 in Toronto. From there, Hughes pedalled a total of 11,000 km across all 10 provinces and three territories. She spent 110 days on the bike. (She actually used a total of 15 bikes during the trip.)

“The ride was all about connecting with people and putting them on the podium—elevating every Canadian to take the stage and tell their own unique stories,” said Hughes. “I’m honoured and humbled to invite Canadians in every corner of the country to relive this transformational journey, to share in the many voices and personal stories recounted in the doc. By talking, we can work toward creating a stigma-free Canada.”

“This epic road movie will leave viewers awestruck at Clara’s tireless determination to tackle the sigma surrounding mental illness head on, while capturing the magnificence and sheer beauty of this country,” said Kevin Crull, president of Bell Media. “This moving documentary serves to keep the conversation going about mental illness, and to break down the stigma—the very essence of Bell Let’s Talk.”

Bell’s Let’s Talk program is aimed at promoting mental health. It’s community fund supports front-line mental-health organizations across the country, providing grants of $5,000 to $50,000 to groups focused on improving access to programs and services that support people living with mental-health issues. Jan. 28 marks the fifth Bell Let’s Talk Day. Clara’s Big Ride, directed by Larry Weinstein (Thirty Two Short Films About Glenn Gould, Our Man in Tehran, TSN’s The 13th Man), will be the focus of the day. The doc will run all day on CraveTV and CTV.ca. In the evening, it will air at 7 p.m. EST/PST on CTV and CTV Two and live-streamed on CTV GO. Clara’s Big Ride will run once more midnight EST on TSN2.