Back from injury, Kyle Jones is ready to take on Chicago at the ITU Grand Final this weekend. TMC’s Taylor Reid had the chance to hear what Jones has been up to.

Taylor Reid: How has training been going since Edmonton?

Kyle Jones: Training has been going well. Since returning from injury I feel like I’ve been getting stronger each week. Unfortunately I wasn’t able to show my fitness progression in Edmonton but things are on track.

TR: All of the major triathlon events this year have occurred on this side of the world. Since you are now living in Ontario, do you think not having to travel far will help racing this weekend in Chicago? 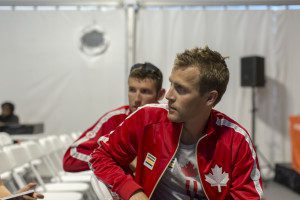 KJ: It’s nice to have big races so close to home. Much of the ITU World Series typically takes place in Europe, so it’s been great to have the last two Grand Finals in North America. There’s definitely an advantage to being on the time zone and an overall sense of comfort and familiarity that can be beneficial at these events.

TR: How have you found balancing family life and attempting to qualify for the Olympics?

KJ: My wife and I are really enjoying parenthood. We’re very fortunate to have a healthy and happy boy! Having family living close by has been extremely helpful. Nana and Grandpa daycare has been instrumental in allowing us to continue to follow our dreams. There’s great peace of mind going out and training knowing that he is well cared for.

TR: At the big events this year you to have be able to pull out some very big results including 18th at Rio. Have you been focusing on hitting the big races hard and structuring your year around them?

KJ: The focus this year was Pan Ams, Rio and Chicago. I started the year recovering from surgery. Having been through the process before in 2010/2011 I knew what to expect and felt confident I would be ready to go for the big events in the summer. The winter and spring were progressing well until I was involved in a bike crash in Auckland. That was something I wasn’t expecting and certainly put a wrench in the plans. Being sidelined and unable to race was tough and my ranking took a big hit. It didn’t affect me for Pan Ams or Rio but I’m lucky to get a start in Chicago and I look forward to making the most of it.

TR: What has been your favourite race so far in your career?

KJ: The Olympic race in London was pretty special. Standing on the start line and hearing the roar of the crowd was unbelievable. That’s a feeling I’ll never forget. I also really enjoy traveling to Australia. There’s always a great atmosphere at the races over there.