Canadian triathletes have the unparalleled opportunity to race on home soil in four different multisport races at world championships next year. The 2017 ITU Multisport World Championships, or “Penticton 2017”, is arguably the most anticipated upcoming triathlon event in Canada.

TMC spoke to the Penticton 2017‘s executive director, Michael Brown, about why he chose to bid on the multisport world championships and what this event means for Canadian triathlon.

A triathlete himself, Brown got his start in the multisport world after years as a competitive swimmer. When he first started race directing, he purchased the Great White North triathlon and has been getting more involved in triathlon race directing ever since.

Last year was Brown’s first year as co-director of Challenge Penticton after he took over operations from the City of Penticton. He was just a month into planing the event when a friend sent him the info for bidding on the 2017 ITU Multisport World Championships.

“We had four weeks to get our bid in, so we completely immersed ourselves in the bidding process,” he says. “We complied a 1o0 page bid over the course of a month and got support from Triathlon Canada, so long as we were willing to hold national championships this year as a test event.”

Penticton was awarded the first ever ITU Multisport World Championships, a 10-day event with athletes from all over the world competing for the titles in long course triathlon, duathlon, cross triathlon and aquathlon.

What makes Penticton the perfect host for such an event? 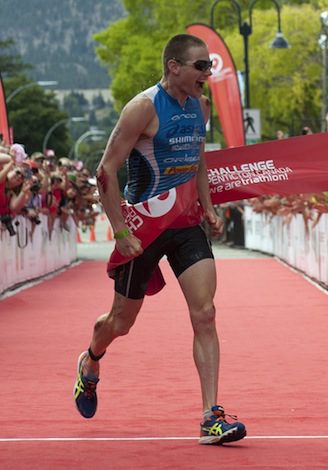 “The history of long course triathlon in Penticton is unrivalled in North America,” Brown explains. “Considering the city’s size, it’s remarkable how much experience there is here.” Indeed, some of Canada’s top long course triathletes, including Jeff Symonds, call Penticton home. Brown says that you can go to a local public lap swim in the city and find several Ironman champions in your lane. There are few other places in Canada where that’s the case.

Penticton has also come to be known for its “volunteer army”. “A race of this size needs around 2,500 volunteers,” Brown says. “We never have an issue getting enough enthusiastic volunteers to come help out.”

He also points out that it takes a whole community to support such an event. “Not many communities would be willing to shut down their main road for an entire day for a triathlon. In Penticton, the general consensus is that this event is going to bring so much to the community. Everyone is behind it.”

Brown says that many families are willing to open up their homes to international triathletes to stay with them over the course of the week. “Every athlete will feel like they have someone cheering for them.”

The event has already garnered lots of international attention. Brown says there’s been particular interest from American and Mexican triathletes who see Penticton as an ideal racing destination.

Canadian triathletes may not have another chance to race in such an event on home soil. Brown says that despite the open registration for Penticton 2017, Canadians should aim to qualify through the many races across the country to ensure our team has a strong showing as the hosts of the event.

“We want to make sure Canada’s top athletes are racing at our world championships in Penticton,” he explains. “That will happen through people going out and racing the qualifying events and earning a spot to race for Canada.”

Check out Jeff Symonds’ tips for qualifying for Penticton 2017 here.

We know there are a few triathletes out there wondering if it’s possible to race all four events at Penticton 2017. “Absolutely,” Brown says. “We’re doing everything we can to ensure this is possible and safe for anyone who wants to. This includes gathering a team of medical and nutrition experts and spreading out the schedule of events to allow for moderate recovery in between.

The event courses are also designed to support multiple races in the week. “The duathlon is a flat course, while the cross triathlon is not.”