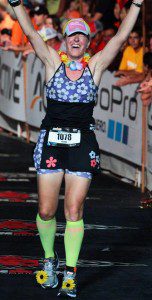 Toronto’s Paula Van Nostrand, fulfilled a dream in October by racing at the Ironman World Championship. We featured Paula in our Kona Preview issue, and followed up with her to find out about her big day in Kona.

TMC: Did the Ironman World Championship experience live up to your expectations?

Paula Van Nostrand: Yes! Worth the wait? Yes! The race was the toughest, most grueling, one of my slowest IM races ever. That said, from start to finish, it was amazing!

TMC: How did it feel to be participating in the race as one of the esteemed Legacy Program athletes?

PVN: I’ll be honest, I wanted so badly to qualify the ‘conventional way’ by placing in the top 2 or 3 in my age group. I came so close a few times (a 4th and 7th place) but never got that coveted spot. So I was a bit reluctant about entering The Legacy Program lottery, I felt like I hadn’t really earned my spot. But I have to say that the massive amount of support and encouragement I received from so many people, I quickly changed my attitude about the ‘not deserving to be there’. I think it’s wonderful that IM has developed this program, it’s good that they recognize the contribution we have made to the sport of triathlon. The reception was an added bonus. Legacy athletes from all over the globe, some amazing stories of people overcoming profound adversity and challenges. The Ironman ‘legends’  Paula Newby Fraser, Dave Scott, Mark Allen and others mingle amongst the crowd and gave some great inspirational words of encouragement. I told Paula NF that I was planning on power walking the marathon She asked me how fast I could walk, when I told her a 52 minute 10km and hopefully one day, a 4 hour marathon, her response – “Paula! You are my hero!” That’s funny Paula NF, you are mine.

TMC: How did the race go for you? What were the specific challenges you faced and particularly this year where many said it was hotter and windier than most?

PVN: I can’t say I was nervous, I was really excited and couldn’t wait for the race to begin. Historically the swim has been a mass start, but this year for the first time, we started in waves. Ten minutes apart the male pro’s, female pro’s then male age groupers and then the women age groupers. So the swim was a lot more civilized than some mass starts I have experienced. But it was very windy and there was a significant swell making the swim a bit of a ‘4 strokes forward, 2 strokes back’ but swimming with thousands of multi-coloured fish and seeing the vast coral and ocean bed “landscape” (another world)  as well as the thousands of people cheering from the sea wall and the dozens of volunteers on paddle boards, canoes and boats definitely helped my slowest swim be very enjoyable (albeit about 20 minutes slower than my usual).

The bike was harder than I could have imagined mostly because of the wind and the heat. The actual course profile seems reasonable and the scenery is stunning, but the head wind and cross winds made it an extremely tough ride. I spoke with one woman after the race, she told me that of the 28 times that she had competed in Kona, that day was the 3rd most difficult because of the weather conditions. I can’t imagine what the other 2 worse races could have been like.

The run (aka walk) was a lot slower than I had hoped but I really enjoyed the entire marathon.

TMC: What are some lasting memories you’ll take from Kona?

PVN: The Underpants Run” A “must” for anyone in Kona for race week. Riding my bike (my strength) into the most ridiculous head winds and cross winds and looking at my speed  and seeing 6 kms/hr on the flats (my usual speed would be 35-40 km/hr). I laughed and cried and said to myself – “Paula, you are in the World Championships!” and smiled, then cried again. The most amazing sunset as I power-walked along the Queen K Highway. Then walking into the infamous “Natural energy lab” it was pitch black but for the moonlight, listening to waves crashing onto the rocks  and the most amazing star gazing I’ve ever experienced. The finish line. Ali’i Drive is packed with people all cheering, high fiving, and pretty much pulling you along to the finishing chute. It was an overwhelming array of emotions for me. Tears of joy, relief, pride, exhaustion, exhilaration. It all happened too quickly.

TMC: Any tips for the Kona rookies?

PVN: If you are planning to win the race, then I highly recommend that you optimize your rest time – feet up, save your legs for the big day. But if you are there for the “Kona experience” Do everything! The Underpants Run, the Parade of Nations, the Carbo load dinner, the Expo’s (there are multiple areas of expo’s with loads of giveaways), there are loads of things to do. I did them all and honestly went into the race exhausted. But in retrospect I wouldn’t change a thing. And the other thing, don’t rush through the finish-line. Savour every moment and take it all in.

PVN: Hawaii was supposed to be my final Ironman. Well, about that, I’m not sure I can stop doing Ironman distance. I love it too much, it’s become so much a part of my life. I really want to go back and race in Hawaii. Shorter races in 2015. Maybe I’ll sneak in a 1/2 IM or 2.