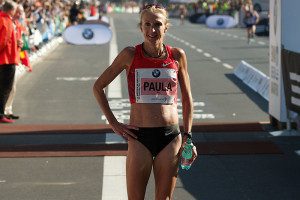 Women’s marathon record-holder Paula Radcliffe released a long statement denying any accusations of cheating against her Monday. The 41-year-old three-time London Marathon champion’s statement is a response to the note from the Culture, Media and Sport Select Committee in the U.K. that British athletes involved in doping may have won the race, based on blood data uncovered and released last month. No athlete was specifically named, though Radcliffe is the only Briton to have won the London Marathon since 1996, suggesting her blood data is being implicated as potentially having been questionable.

“I categorically deny that I have resorted to cheating in any form whatsoever at any time in my career, and am devastated that my name has even been linked to these wide-ranging accusations,” begins a reprint of Radcliff’s statement on Let’s Run. Her personal website was down, seemingly due to high volumes of traffic, at the time of publication. “I have campaigned long and hard throughout my career for a clean sport. I have publicly condemned cheats and those who aid them. These accusations threaten to undermine all I have stood and competed for, as well as my hard earned reputation. By linking me to allegations of cheating, damage done to my name and reputation can never be fully repaired, no matter how untrue I know them to be.”

Radcliffe’s marathon record of 2:15:25, set at the 2003 London Marathon, has caused suspicions among some fans before, it being nearly three minutes ahead of the next-fastest female marathon runner, well ahead of other proven PED users. Still, she has never failed a drug test and has for her entire career been one of the most outspoken voices against drugs in sport.

Radcliffe, in her statement, seems to admit there may have been fluctuations in her blood data, but notes that does not equate to a violation of doping rules.

“At the time of the recent Sunday Times coverage, I wrestled long and hard with a desire to speak out with the true facts concerning my position, and, to fully explain any fluctuations in my blood data,” said Radcliffe, who recently said she did not believe athletes should make their blood data public when compatriot Mo Farah, among others, made his public. “However by ‘coming out’ in that fashion I was made aware that I would be facilitating mass coverage of my name in connection with false allegations of possible doping, which would enable further irreparable damage to be done to my reputation. As a result of today’s Parliamentary Hearing I can no longer maintain my silence.”