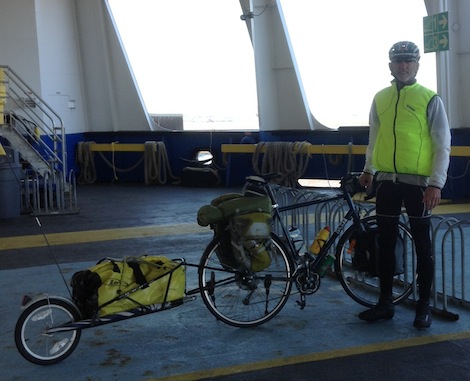 One of the most intriguing stories leading up to this year’s Ironman Canada race in Whistler is an Ontario triathlete who is riding, running and swimming across Canada as his training for the big race.

Paul Popovich, 56, who lives in Stouffville, Ontario, just north of Toronto, flew to Cornerbrook, Newfoundland in late April to begin a four month ride across the country which will end when he rides up the Sea to Sky highway in time for the start of this year’s Ironman Canada event.

“Popo” (pronounced Pop-Oh) is known as much for his easy going manner, wacky sense of humour, and penchant for mishaps and getting lost at races as he is for his dedication to training and race success.  His eccentric habits include taping sandwiches to the frame of his bike for in-race nutrition, getting lost on a bike course because he followed the elites into the finish area instead of heading into the second lap with the other age group athletes, and taking a nap at the side of the road during Ironman Wisconsin only to be woken up by a police office before carrying on with the event.

Popovich is riding across Canada on a touring bike – complete with fenders – that he bought after friends advised him that riding a tri bike for four months wasn’t exactly a good idea. The bike, which he refers to alternatively as his “rig” or the “tank”, has stood up well and was a sight to see when he stopped in Calgary at the end of July to enter the Half Ironman event there. Popo and “Tank” garnered many comments as they passed by his competitors on their suped up tri bikes!

To round out his riding with swim and run training, Popovich is giving new meaning to the term “brick workout” by fitting in long runs whenever his legs are up to it and has been swimming in any lakes he finds – though that part of his training got started a bit later on in the tour as water temperatures in April and May were too low to feel his arms and legs, let alone use them for an hour!

Like many Ironman athletes, Popovich’s dedication to preparation is intense. As he was preparing for this epic training ride, he moved out of his cottage and into a tent where he stayed no matter what the weather conditions and even when his family had guests staying with them.

A true Canadian, Popovich loves his beer, wears plaid pyjamas whenever possible, and assists with the Cops for Cancer event every year.  He also loves to stop at Tim Horton’s for a “cop’s breakfast” of a donut and a coffee.

During his tour, Popovich has had an endless series of truly Canadian experiences involving extreme weather, changes in elevation, encounters with wildlife, bugs, bugs and more bugs and, more than anything else, many opportunities to meet with a multitude of friendly Canadians whose reaction to his ride range from joining in for a portion of the trip to looking at him as if he is some kind of lunatic.

You can follow Paul’s cross-Canada training ride on his blog.