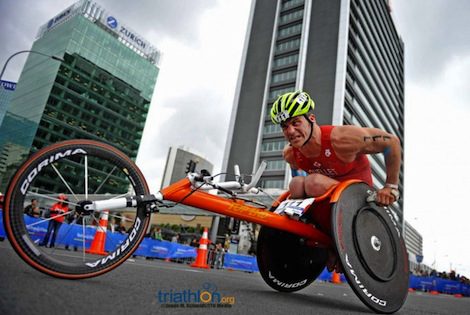 The ITU announced this morning that paratriathlon’s PT1 category has been added to the schedule of the Gold Coast 2018 Commonwealth Games.

“Having paratriathlon included on the programme for the 2018 Gold Coast Commonwealth Games is great news,” said ITU President and IOC Member Marisol Casado. “I can’t imagine a better place for paratriathlon to be tested on the Commonwealth Games programme than Gold Coast, which hosts many ITU events and is a mecca for the sport of triathlon. Paratriathletes will no doubt enjoy fantastic support in the coastal city.”

The Gold Coast has become an increasingly important triathlon destination over recent years, serving as the consistent host of several major ITU events and in 2018 now hosting both the ITU Grand Final and Commonwealth Games.

Commonwealth Games Federation President Louise Martin CBE said “We’re thrilled to be working with ITU and Gold Coast 2018 organisers GOLDOC and debut Paratriathlon on the CGF sports programme at the upcoming edition of the Commonwealth Games. Building on the enormous success and profile of the Triathlon competition at Glasgow 2014 and internationally, I’ve no doubt that this will be an incredibly exciting addition to the Games schedule”.

This year, Rio is the first Paralympic Games to include men’s and women’s paratriathlon. For the men, the PT1, PT2 and PT4 classes are set to compete. For the women, it’s the PT2, PT4 and PT5 classes. Christine Robbins and her guide Sasha Boulton, who recently claimed a bronze medal at the Sarasota CAMTRI North American Championships, hope to qualify for the Paralymic Games in the PT5 category. Stefan Daniel has already qualified in the men’s PT4 class.