Ironman is the name of the new tire and the name says it all: As uncompromising as the legendary competition itself, Schwalbe has trimmed its first pure triathlon tire to the requirements of the athletes.

Schwalbe’s new Ironman is the official tire of the international competition series to be staged by the World Triathlon Corporation (WTC). With Schwalbe and the WTC, two companies that fulfil highest requirements in their own sectors are committed to pooling their strengths in the future.

Consisting of 3.8 kilometres of swimming, approx. 180 kilometres of cycling, and a marathon, Ironman is the epic of the triathlon world. In the cycling segment, aerodynamics is of vital importance. We’ve designed the tire specifically to pair with aerodynamically optimized wheels utilized on time-trial bikes.

“With a width of 22 millimetres, we have tuned the dimensions of the tire perfectly to suit this purpose”, said Christian Lademann, Road/Triathlon Product Manager at Schwalbe. “This saves the athletes a great deal of energy. In the 180 kilometre cycling segment at a speed of around 40 km/h, riders need to produce an average of 300 watts. The new tire dimensions reduce this by about 10 watts. This saves a whole three minutes in terms of time!”

In complex wind tunnel tests, Schwalbe determined the tire width that produces the least aerodynamic drag for the entire wheel system. In this context, the 22 mm tire width was by far the best, whereas both the conventional 23 mm tire width, as well as the widths 20 and 25 mm, showed a significantly higher aerodynamic drag. The tests also showed that an additional component at the interface of the tire to the modern aero wheel rim is unnecessary, as the airflow follows the contour of the wheel rim.

Due to the wider rim width of the aerodynamically optimised wheels, all tires will, in practice, become slightly wider again. As the space for the tires is usually limited in the case of time trial bicycles, with a width of 22 mm, the Schwalbe Ironman also offers an advantage in this respect.

As far as the tread was concerned, Schwalbe chose an aerodynamically optimised, high-traction, grooved tread that covers the whole sidewall and gives the tire a very dynamic appearance.

First off, Schwalbe’s folding tire, the Ironman has been approved for a maximum pressure of 160 psi. “Such a high pressure is not recommendable on the majority of roads, but on time-trial segments with a very homogeneous road surface, the high air pressure reduces flexing and is, thus, an advantage in terms of rolling resistance”, explained Christian Lademann. “In addition, the tire can be pumped up a bit more without hesitation if the bike has to be handed over for the competition the day before.”

In addition to the folding tire version, the Schwalbe Ironman is also available as a classical hand-sewn, tubular tire and in a modern tubeless version. Christian Lademann sees the change of system to tubeless tires as positive: “Up to now, there have been virtually no tubeless tires for racing bikes. However, in practice, this system offers excellent advantages. There is considerably less rolling resistance than with classical folding and tubular tires, because there are no frictional losses between the tire and the inner tube. At the same time, tubeless systems are extremely safe. A sudden loss of air is virtually impossible. There are no longer any inner tubes that can overheat and burst. A puncture protection fluid seals punctures immediately.”

The Schwalbe Ironman in the size 22-622 will be available beginning in May.

Schwalbe tests its Ironman in the wind tunnel. 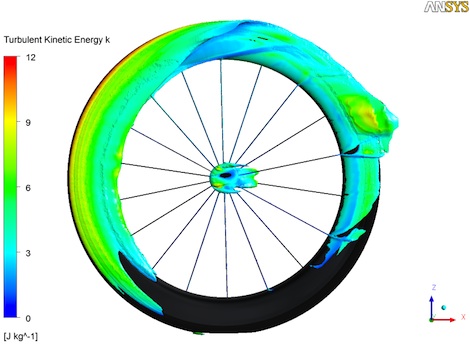