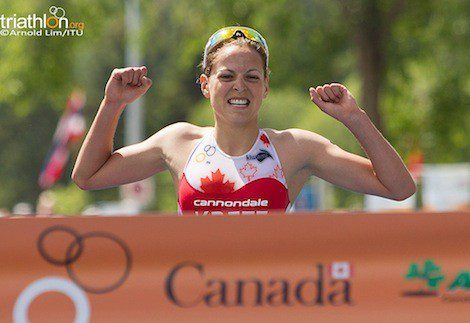 Athletes wanting to race an international event without having to complete the entire triathlon will be happy to learn that USA Triathlon has just announced five events that will form the inaugural USA Triathlon Mixed Team Relay Series in 2014.

The Mixed Team Relay Series was created to encourage continued participation in multisport and raise awareness of the growing mixed team relay format, first introduced by the ITU in 2009. Relay teams comprised of two men and two women ages 10 and up will compete on a super sprint triathlon course, with each athlete completing a 100 to 150 m swim, six to eight km bike and one to 1.5 km run. All four team members will complete each discipline together before moving to the next segment.

“We’re launching the Mixed Team Relay Series to capture social energy and offer a unique race option to athletes who are looking for new ways to participate in the multisport lifestyle,” said Rob Urbach, USA Triathlon CEO. “The mixed team relay format is a great way for friends, families, co-workers and teammates to share a dynamic experience, and we look forward to expanding the reach of the series in the future.”

The mixed team relay format has been gaining popularity over the past few years. USAT  has hosted a Mixed Team Relay event at its Youth and Junior National Championships since 2010 and Collegiate Nationals since 2012. In 2013, the U.S. team of Gwen Jorgensen, Ben Kanute, Sarah Groff and Cameron Dye earned a bronze medal at the ITU Mixed Relay World Championships in Hamburg, Germany. Most recently, the Canadian team of Amelie Kretz, Andrew Yorke, Joanna Brown, Alexander Hinton earned the victory at the Sarasota PATCO Mixed Relay Pan American Championships with a time of 1:25:56 at the inaugural event on March 9 in Sarasota, Fla.

Events in the 2014 MTR Series include: