The men’s race saw American Andrew Starykowicz roar to the front of the race thanks to a 24:03 swim, and 2:14:42 bike (top split) combination. However, it was only a matter of time before the faster runners in the field would snatch away his lead. South African James Cunnama was the first to do so and his 1:14:34 run earned him the win in 3:59:17. New Zealand’s Terenzo Bozzone kept gaining on Cunnama but ran out of real estate to finish just 12 seconds behind (3:59:29). Australia’s Joe Gambles claimed third (3:59:48). Kelowna’s Trevor Wurtele steadily moved through the field to finish 12th (4:12:29).

By The Challenge Media Team 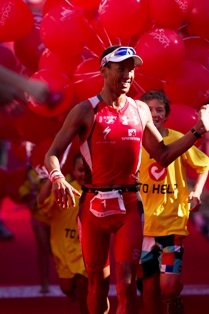 Australia’s Chris McCormack showed why he is the world’s best Iron distance athlete dominating at the inaugural Cairns Airport Challenge Cairns Iron distance race today, cruising across the line to beat home South Australia’s Matty White who put in a courageous performance for his second place. Australia’s Rebekah Keat has announced she is back to her very best with a come from behind victory from surprise packet Michelle Mitchell (Northern Territory) in just her second Iron distance race.

“This is my first race back here as a world champ so the win is very important, I’m getting older and I was a little bit intimidated by them, they were all in good form and I wanted to make sure that I schooled them a little bit and say ‘hey – I’m not done yet’,” said McCormack.

A small but talented men’s field lined up to contest the inaugural event and after the 3.8km swim leg, it was swim/bike specialist Clayton Fettell first to exit in a very slick 43.48, followed by New Zealand’s Graham O’Grady and David Dellow. McCormack was 3min 30sec in arrears with Tim Berkel, Jamie Whyte (NZ), White and the UK’s Jonathan Hotchkiss a further 2 minutes behind him.

“I couldn’t believe the pace of the boys in the swim.  I knew Clayton Fettell was swimming well; I was in no-man’s land for a while there. The young boys really laid it down in the water,” said McCormack post race.

In the early stages of the bike leg Fettell and O’Grady got into a good rhythm but it took McCormack until the 50km to bridge the gap and join them.

The chase group of Berkel, Whyte, White, Dellow and Hotchkiss were now 4mins behind and not making up anytime, Whyte doing a good load of the work.

“I rode solid and I got in front, but you never know – that run into town is a long way, mentally very, very tough and three laps of the course makes it tough, but the crowd support was absolutely amazing,” said McCormack.

The field remained unchanged on the return trip back to Yorkeys Knob but had to contend with a stiff headwind.

“I played it patient and I knew if I could push down that section to Port Douglas on the bike I could establish a lead, and it played out well. They say ‘you ride for show and you run for the dough’ and I knew that was the key coming into the marathon,” said McCormack.

McCormack was the first to hit the change tent and a quick transition saw him head out with a slight lead, even managing a smile for the crowd and ‘V’ for victory sign, perhaps.

The chase group of, Hotchkiss, White, Whyte and Dellow had blown out their time to 5min 33 as they hit transition with Berkel another minute behind.

Once McCormack hit the tarmac he was racing himself and as his hit the half way mark had amassed a huge 8-minute lead.

“I felt really strong on the run, I tried to work those young guys and then in the back section of that bike ride I really pushed it, I wanted to set a good tempo out of transition, but I struggled and mentally that run into Cairns is really tough,” McCormack said.

The sign proved to be an omen as he then went about decimating the run to easily win by over 12 minutes from White and Port Macquarie’s Tim Berkel holding on for third despite fading in run leg after swapping the lead with White.

The two time Ironman champion made it look easy at the end claiming the world’s second richest prize purse.

“The course was tough, it was undulating on the bike, and the run was very draining.  The bike was hard, the swim was choppy but all over it was a very honest course.

“I swung around the corner into the red finish straight and the crowd was 5-deep, that’s what we do it for, that is the hook that is iron-distance racing and Challenge do it better than anyone.

“I think Roth is their marquee event but I think they had better look out – Cairns have got the potential to explode,” added McCormack.

White was thrilled with his second place, it has capped off a huge 12 months for him.

“This was the most beautiful scenic courses around so riding along that coastal road sure does take your mind off the pain.

“I know Chris (McCormack) has dropped his speed at the moment because he is working towards short course so I knew he was going to have a bit of a lead out in the swim but in a course like this it’s important to run your own race, I felt strong in the last 10km.”

The women’s event was a tightly contested affair from the start with all the top contenders in the mix after the swim.

“I felt pretty comfortable in the swim, there was a big group of us and I sort of just sat in there, no-one really got away and then I really got my rhythm on the second lap of the swim,” said Keat.

It didn’t take long for our expected leading women to establish themselves at the head of the field on the bike, Granger, Keat, Molloy and Pearson.

Lester was the first to make a move and attach herself to the lead group at the 75km mark while Molloy lost contact with them.

By the turnaround at Port Douglas Granger, Lester and Pearson were still in contact but Keat was now behind after suffering a 4-minute penalty.

“On the bike I lead for about 20km on the second loop and then got 4 minute penalty, I think I took too long to over-take, I had a bit of a chat with Belinda (Granger), after that I just smashed myself to catch up, I knew if I could make it to the front of the pack I’d have a good crack at the title,” said Keat.

As they approached the 12km hill section Pearson was the first to drop off while Granger and Lester showed their bike strength opening up a 2-minute lead.

The chase group was another 2 minutes off the pace and included Keat and New Zealand’s Candice Hammond having a great race to be among the medal contenders.

“It was really tough and so hot coming in from Yorkeys Knob, but Cairns is so beautiful and I had the distraction of beautiful scenery, so that definitely helped,” said Keat.

At the changeover Granger and Lester remained together, Keat entered 2min 18sec later and Hammond right on her hammer.

She then set about reducing that deficit even further to move into the lead on the run after the 16km mark, Hammond clung to second with Granger holding down third.

“I had some really tough patches out there on the run but somehow I came good on the second last lap and I think the crowd got me home and I got a second wind, but I didn’t think I had it (the win) until I was about 400m out – I really struggled on the run,” said Keat.

Keat showed what a great champion she is and extended her lead over the closing stages of the run to be able to enjoy the run down the finish shoot.

“To win in Australia is just unreal, now I am the first winner of the race so I’d better come back to defend it a few times,” laughed Keat.

In the upset of the day, the Northern Territory’s Michelle Mitchell had the race of her life to claim the biggest win of her career finishing second.

“I am really happy with how I raced today, the amazing support from Cairns, especially along the esplanade coming in, made it a really great day.

“It was my second Iron distance event so I have to say it would be the highlight of my career, I’m really happy with my result,” said Mitchell. 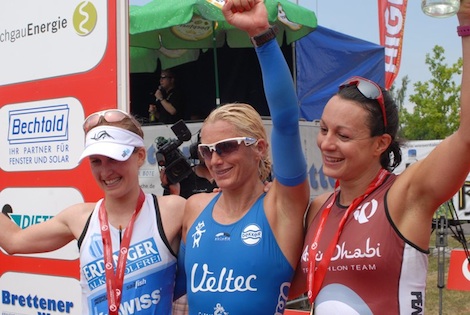