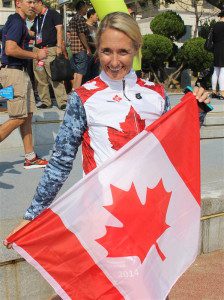 The trials and tribulations continue for Julie Miller, the Squamish-based athlete who earlier this year was barred from Ironman competition. She has now been banned from “any event sanctioned by Triathlon Canada and its member organizations for a period of two years.”

Here’s the statement from Triathlon BC:

Triathlon BC has been made aware of allegations against a provincial athlete’s conduct while participating in sanctioned events in BC.  As a direct result of an extensive review performed by Triathlon Canada’s Disciplinary Committee, in addition to a Triathlon BC-led investigation, a sanction has been placed against this athlete.

Effective November 1, 2015, Julie Miller is banned from any event sanctioned by Triathlon Canada and its member organizations for a period of two years.

Triathlon BC unequivocally supports fair and ethical competition, and believes it is a fundamental premise of all sports.  Our Fair Play Policy espouses respect, responsibility and integrity among all participants as its framing statement, and expects all competitors to be honorable in their relationships with other participants. Triathlon BC’s Fair Play Policy can be found on our website.

Questions were initially brought up about Millers results at Ironman Canada, where, in both the 2013 and 2015 races Miller didn’t have any run splits and her run time had to be manually entered. According to a source involved in the 2015 event Miller stated that her chip had fallen off during her bike to run transition. (According to officials at Sportstats, the timing company that timed both the Ironman Canada events, about 30 to 40 pounds of force is required to take a chip off its strap. Photos of Miller competing in the run show a timing chip strap on her leg, which would imply that the chip had either malfunctioned or had fallen off somehow.)

When contacted by Triathlon Magazine Canada about her initial Ironman Canada DQ, Miller provided this statement:

“I know the race I ran throughout the whole course. I know how I performed and the training that went into that performance, and I am confident in the results as they were originally announced.”

After the issues were raised about the Ironman Canada races, Miller’s results in other events were investigated, including the 2014 Subaru Vancouver Triathlon, prompting a review by Triathlon BC and Triathlon Canada.