The Vineman 70.3 is a point-to-point event that starts with a swim in the Russian River at Johnston’s Landing in Guerneville, California, rolls through the Sonoma wine region, and finishes with a one loop run in Windsor.  The bike course meanders through rolling hills dotted with spectacular vineyards while the run is a half marathon lollypop out to the La Crema Winery.  In one word the course is:  stunning.  The quality of the venue is the first very good reason this race sells out each year and the second is the quality of the race production.  This race is second to none in how professionally and seamlessly the logistics are handled.

One item of note is how incredibly well the professional athletes are treated at this event.  Dave and Amy Latourette really go above and beyond with the pro field and it shows with the quality of athletes in attendance.  The 2014 Vineman 70.3 is one of the toughest events in terms of depth of field and this year was arguably the best field assembled so far other than St George, particularly on the women’s side.  Meredith Kessler, Laura Bennett, Melissa Haushildt, Valentina Carvallo, Emily Cocks, Rachel McBride, Sara Gross and myself were just part of the long list of pros.  A lot of this is due to the efforts of the organization so chapeau to both Dave and Amy from the pros!

Now on to the race and for this report it will be mostly an Oh Canada Chicks, eh bias.  Big congratulations to Tim Reed, Tim Don and Callum Millward for taking top 3 in the men’s event.  However, since I had a front row seat for the women’s event (well, 2nd in the women’s event) I will recap what I know from where I was racing. 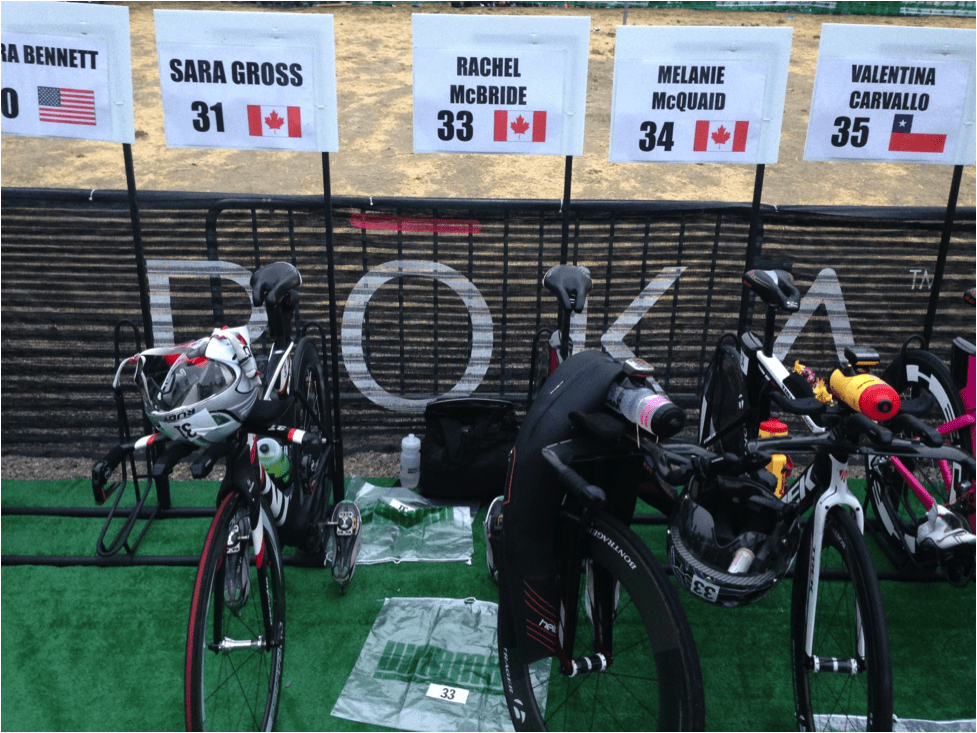 Meredith Kessler put on an absolute clinic in triathlon.  She was first out of the water and followed that with race best bike split and within seconds of best run split.  One word was: domination.  To have that performance over a field that includes one of the most dominant females in 70.3 at the moment- Melissa Haushildt- was impressive.  Meredith is absolutely on fire this season and it was inspiring to see her strength across all disciplines.  In the end, the swim made the difference in the race deficit.

For those of us racing for second, we nearly all came out of the water together.  There was a group that wisely took a straighter line along the shore and thus snuck about 30-40 seconds out of the main pack.  That was Rachel McBride’s group, while Mel Haushildt, Sara Gross and I were all in the meandering pack.

On to the bike, I was riding with Melissa and Emma Kate Lidbury for half of the ride.  We ended up taking turns as the cassette I chose made me very inefficient in the flat sections.  I think I remember the course being much hillier than it actually is and in the future would not choose to have such a large cog on the back.  In the end, riding a higher cadence was probably good practice and at about halfway I was riding in third alone and brought back Rachel at Chalk Hill.  By T2, Rachel and I ran in together but could hear Mel hot on our heels.

In the first three miles, Rachel and I were running together.   The course is flat with short, steep hills in the first four miles and rolls out to La Crema winery for a dirt hot lap of the vineyard between miles 7 and 8.   Melissa had passed at about mile 2 but wasn’t rocketing away from us so I thought maybe we might keep a really, really long bungee to her for the duration of the half marathon.  However, my legs stopped working between mile 4.5 and mile 9 and while I struggled I was easily dropped by Rachel.  She did a super job of keeping Mel on the bungee, running strong to take third and a career best performance.  I pulled it back together after I had some time in the dirt at the winery; kick started the motor again, and managed to pull it back together in the last 3.5 miles to save fourth.  I was followed by Emma Kate Lidbury in fifth.

Rachel reflected on the race: “I knew the caliber of the field at Vineman 70.3 was going to be world class and amongst the most competitive I had raced in a long time. I am very happy with how I executed my race. It was exciting to battle it out all along the course with Mel and have Sara in the mix. I am proud to race with such incredible Canadian athletes!”

Sara Gross did not have a career best day but still rallied her acting skills for the high budget production of “What if pro triathletes behaved like pro soccer players”.  Her thoughts on the day: “The highlight of my weekend was making the video.  As for the race, awesome venue, great course, it’s just my body that didn’t cooperate!”

The podium honors included commemorative wood boxes from La Crema winery containing a double magnum for the winner, magnums for second and third, and bottles of pinot noir for fourth fifth.  These are easily one of the most festive and useful trophies to add to any pro or age group athletes cabinet (all winners, pro and age group, get the wine boxes).  This prize is particularly motivating for me, and it seems I will need to return to California next year, as the goal was a minimum magnum-sized box.   So back to work for me plotting my strategy for larger wine box trophies while the rest of the gang of Canadian pros get ready for the Calgary 70.3 in two weeks’ time. 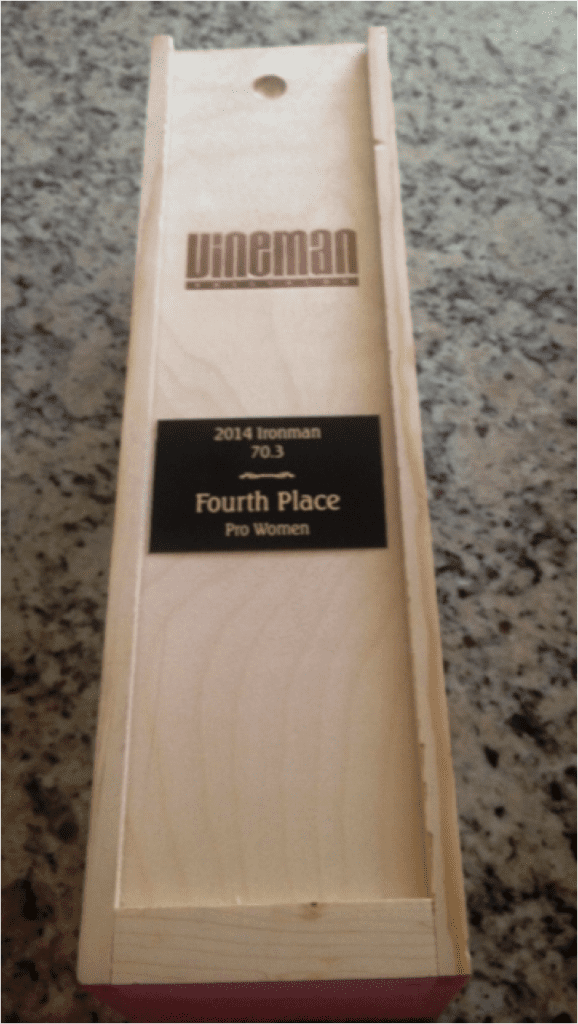