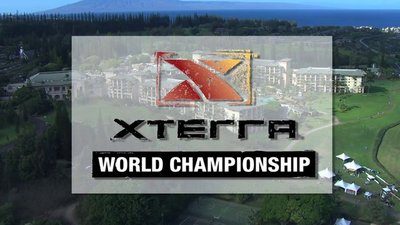 It is that time of year for me to prove how wrong I can be. I have never seen so difficult a task to predict the winners as this year, especially in the men’s race.

You can’t look at the women’s field without seeing Lesley Paterson as the favorite. Super Czech pro Helena Erbenova handed the little Scot her only loss this year at the ITU race in Holland but Les was not at her physical finest there. Have no doubts; Erbenova is the real deal and has dominated Europe for two seasons.

Very much in the mix for the top spot is Chile’s Barbara Riveros (pictured). Barb was 2nd at Maui last year and finished less than a minute behind Lesley at the USA champs and actually had a slightly faster run time.

Lurking in the back with every possibility to win must be three-time World Champion Julie Dibens. Julie made her XTERRA return at Beaver Creek this summer and showed off her unbelievable swim skills and was very fast on the bike. She was still not 100% and backed down on the run – or was she keeping her British powder dry?

Heather Jackson was 4th at Maui last year and has had a phenomenal 70.3 season. She raced at Utah but was coming off a hard road schedule and did not finish on the podium. She’ll be ready at Maui.

Never to be overlooked is three-time World Champion Melanie McQuaid and the now-back-to-full-strength Shonny Vanlandingham. Both are motivated racers who are not ready to be put in the “past their prime” bucket.

How will it shake down? Dibens, Riveros, Jacqui Slack and Chris Jeffrey will get out front on the bike. It will be up to Lesley, Helena, Heather, Shonny, Melanie and the others to catch them but not use up all their energy because they know they will be in a battle on the run.

There are a number of very fast women who have every expectation to stand on the podium; Renata Bucher (SUI) Suzie Snyder (USA) Danelle Kabush (CAN) Jacqui Slack (GBR) Emma Garrard (USA) Kathrin Mueller (GER) Flora Duffy (BER), Carina Wasle (AUT) and South Africa winner Carla Van Huyssteen are all fast and are all winners.

For the men it is even more challenging. Costa Rica’s Leonardo Chacon easily won Mexico and then repeated against a strong field at Utah. This very quiet man is easy to miss in a crowd, but never forget he was 4th last year at Maui. Look for him at the sharp end on Sunday. Josiah Middaugh has had a fabulous season winning the USA series championship and has to be the favorite. In 2012 he beat everybody in the field by over 2 minutes, except one. Javier Gomez is not at Maui to defend his title and Josiah has shown both the speed and the mental toughness to bring the World Title back to the USA. It will not be easy as 4 time World Champ and XTERRA icon Conrad Stoltz is looking unbelievably strong on the bike and wants that 5th title badly.

The only rider out there who matched Conrad at Utah was 2008 World Champ Ruben Ruzafa. Ruben switched his focus from mountain biking to XTERRA this year and won two races in Europe and was 3rd at the USA Champs. The fact is – Chacon, Middaugh, Ruzafa and Stoltz were within a couple minutes of each other at the USA final. They could be even closer at Worlds.

A whole host of European speedsters are coming; Spain’s Hector Guerra won the Euro tour with young Belgian Yeray Luxem close behind. World Champ Nico Lebrun is doing his last Maui as a top pro and would love nothing more than to go out on the podium. Brit Asa Shaw was 7th last year and is again healthy after a disappointing Euro season. South African winner Richard Murray is not well known here but he beat Conrad and Dan Hugo straight up. Aussie Ben Allen is a threat, along with fellow Aussie and an Olympian – Courtney Atkinson. Toss in Canadian Brent McMahon and Holy Cow, what a field.

McMahon, Allen, Chacon, Shaw, Atkinson, Richard Stannard, and Branden Rakita should lead out on the bike. The South African trio of Murray, Conrad and Dan Hugo will not be far behind nor will the legendary Olivier Marceau. I expect Conrad to charge hard on the bike and take the lead from Chacon with Josiah and Ruzafa coming after them. If Ben Allen, McMahon, Hugo, Murray, Lebrun or Asa are on their game we could have 8-10 men coming into T2 in close proximity. Josiah gave away over 3 1/2 minutes to Gomez in the swim last year yet finished less than a minute behind. If he can do that this year he’ll see the finish line first.

But what will the Pacific Ocean give us for swim conditions? What will Maui give us for temperature? All that will play into the end game. And we can’t forget the XTERRA family with more than 700 age group athletes from around the globe coming to see if they can go home with the title XTERRA World Champion. It’s a worthy field fit and ready to battle.

Past XTERRA World Champs in Bold

Past XTERRA World Champs in Bold