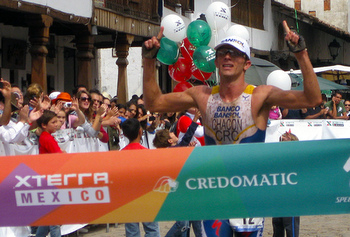 Olympians Leonardo Chacon from Costa Rica and Fabiola Corona from Mexico City captured the sixth edition of the XTERRA Mexico Championship at Tapalpa, Jalisco on Saturday.

It’s the second Mexico title for Corona, and the first for Chacon who was racing in just his second XTERRA championship.

A beautiful day for the 6th XTERRA Mexico. This is the 3rd year in the State of Jalisco in the terrific small village of Tapalpa, about 2 hours from Guadalajara. A record number of entries for both Sprint and Champ distance assembled early at the starting point of Valle de Largo (Valley of the Lake) near the geological phenomena named Las Piedrotas.

The champ race started at 9:15 with four wave starts. It was wonderful chaos in the water as the fast pro’s started lapping into the slower age groupers but everyone survived in fine fashion. Leonardo Chacon from Costa Rica took an immediate lead with Leonardo Saucedo just seconds behind. South Africa’s Dan Hugo took off hard in an effort to catch Chacon and took last years Champion, Francisco “Paco” Serrano with him.

For the women, ex Olympian and Mexican Champion Fabiola Corona took command out of the water. Shonny Vanlandingham, who won here in 2011, had a bad start to the day as she had to reseal a slow leaking rear tire. Her swim was not good and she was a bit disoriented running up the steep hill from the lake to T1. She missed a corner about half a mile into the bike but recovered nicely and, like Hugo, started her pursuit of Corona.

Hugo caught Chacon and they rode together with Leo taking the lead up the steep inclines and Dan re-passing and leading on the downhills. Eventually Dan got a bit of a lead on the Costa Rican but had a fall and Leo was back on him again. From T2 it was all Leonardo who got a lead on the first lap and held on to it to win by just over one-minute.

“This was an important race for me because I needed to get my spot in Maui,” said Chacon, an Olympian and ITU racer who was fourth last year in his first attempt at the XTERRA World Championship. “I’m really excited with this performance and love this style of racing. I will now train for Maui with as much passion as I did for the Olympics.”

Back to the women’s race, Vanlandingham had to stop twice to put air in her rear tire and just made it into T2 a minute behind Fabiola. To add insult to her day that was not going well, she made a wrong turn on the run course. She simply realized that she was not going to catch Fabiola and kept a healthy pace to take 2nd. She performed like a true World Champion.

Fabiola had a great race. I remember three years ago she won XTERRA Mexico and carried her nephew across the line. Her swim was strong, her bike was only one-minute slower than Shonny and her run was by far the quickest of the women. A well-deserved win and the Mexican fans went crazy for her.

70.3 racer Dunia Gomez was third and Ana Paula Guerrero was 4th after being nipped by a German Shepherd bad enough to tear her shorts and draw a bit of blood. Definitely she wins the Warrior award.

Perhaps the most impressive performance of the day belonged to 17-year-old Mauricio Mendez. He came across the finish line 6th but when the wave delays were deducted this fantastic young man was 3rd overall! This did not surprise those following the XTERRA America Tour as Mauricio won the amateur titles and was 7th overall at both the XTERRA West and Southeast Championship races in April and May this year. I cannot wait until he and Neilson Powless meet on Maui. These two are bona fide pro’s for the future and should have a great race in October.

Best stories of the day had to be a mountain farmer on the bike course with three burros. He was chopping firewood and the mules were laden down with wood and on the trails they walk every day. And those trails are singletrack! Only today there were about 500 bikers that wanted the same trails. Will Kelsay, 6th overall, was catching another rider when they came upon the animals. The first rider spooked the mules and they jumped a bit causing Will to take a detour through the bushes. Everyone laughed about the mules and a small herd of cows up on the mountain and to a person said “hey, this is their home not ours, we loved it”. A few Iron types were laughing about it saying “We will never see that on the road” … absolute XTERRA Mexico.

The finish line, as always, was packed. The town square was rockin’ with an 8-piece Mariachi band playing the athletes to the finish line, Corona girls handing out ice cold Corona’s in athlete recovery. Yes there was juice, electro-drinks and water and loads of fruit and food.

There is so much more that makes this race special. The Mexican hospitality gods even went so far as to allow the crew to take down transition and the finish line after the race before it started to rain. The rain went away in plenty of time for the fireworks crew to setup their 50′ high poles full of fire and smoke and to host awards. Despite the rain several thousand clapped and cheered as their friends and family came up to claim their medals and Maui slots. The firework show did not disappoint although the aerials were cancelled because they got wet! The frenetic Mexican band came complete with uniforms playing 8/8 rhythm music and the fiesta began. It ended sometime that night but darn if I can remember. I repeat again – the stories about Mexico being dangerous are absolute horrible sensational journalism and simply not true once you get away from the borders. Flights abound from every major gateway to Guadalajara and this is one you cannot make excuses not to attend.

XTERRA World Tour: XTERRA Mexico was the 16th World Tour event to qualify amateur athletes into the XTERRA World Championship to be held in Kapalua, Maui on October 27, 2013.