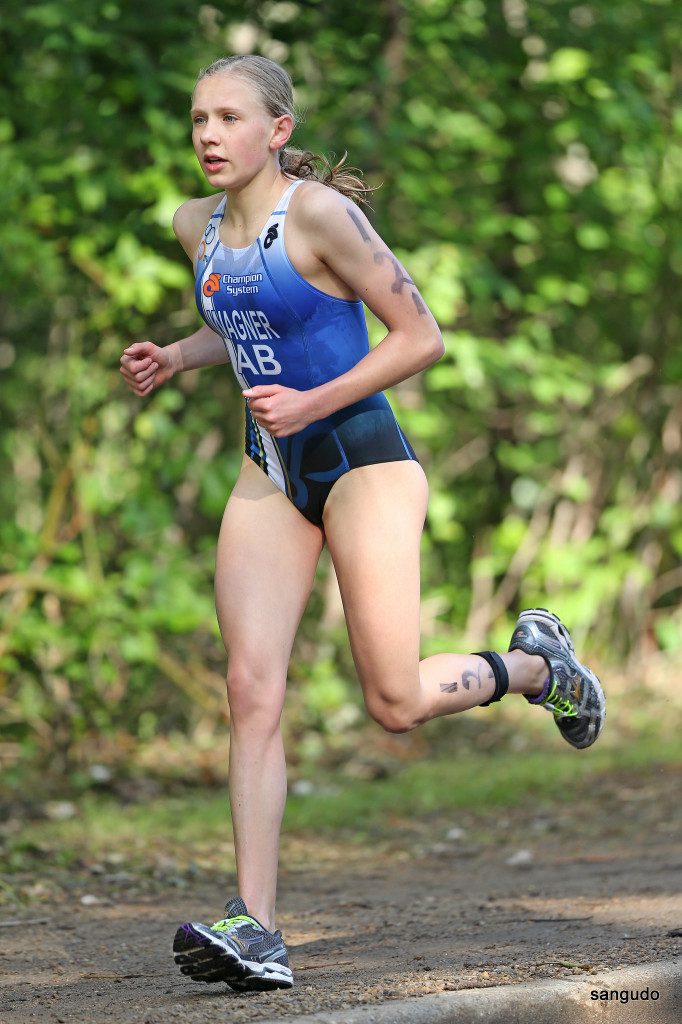 Despite her achievements in the sport so far, she hasn’t been a triathlete for too long. “I started a few years ago,” she explains. Before that, she had always been active in a variety of sports. Her main endeavour was competitive swimming, which she was competing in at the national level and which took her to Olympic trials.

As she got into high school, Wager started cross-country and then cycling so that she could start competing in triathlon. “Once I started, I made it my goal to qualify for both swimming and triathlon at the 2013 Canada Summer Games,” she says. “I ended up representing Alberta in both sports and I won the triathlon.” That’s when she realized she “was pretty good at it.”

“Pretty good” in Emily’s books is more like “exceptional” for the rest of us.

Wagner went right from graduating high school into her first year at the University of Calgary last September. “Right now I’m in a general first year program,” she tells TMC. “But I’m going to study communications next year.” She’s made the adjustment to university life well and even manages to swim competitively for the local Cascade swim team on top of her triathlon training.

“As a swimmer, I always specialized in breastroke,” Wagner says. “But since moving to triathlon, I’ve become more of a distance freestyle swimmer.” She says she spent the winter working on her speed over the longer distance, which will benefit her in triathlon as well.

This winter she also put in some good training time on the bike and run. Under the program of Jonathan Hall — one of the country’s best triathlon coaches and the head coach of the National Performance Centre in Victoria — Wagner has been working to make herself a well-rounded triathlete. “Right now, my cycling isn’t as developed,” she explains.

Wagner met Hall at worlds last year and knew she wanted to take her training to the next level with his program. “I knew I wanted to get involved with the National Performance Centre,” she says, “And I really liked his coaching style.” This summer, she plans to go to Victoria to train with Hall’s group and take advantage of the idea climate. She says she wouldn’t mind ending up in a warmer climate permanently. Living in Calgary means most of her training is done indoors right now.

Currently, Hall delivers Wagner’s training program online, given the distance between them. But Wagner also works with coach Lisa Mensink and trains with her group, the Kronos Triathlon Club in Calgary.

Wagner says being coached as a junior triathlete is different from her experience as a swimmer. “It takes a lot more communication with your coaches,” she explains. “In the water, you have someone on deck speaking to you directly for the whole practice. With triathlon, there are three sports and so it’s more complicated relationship. You have to check in often.” Wagner makes it work and likes the results she’s seeing so far.

If Wagner wants to keep seeing strong results, she knows she has to continue working hard. Right now, that includes 12 to 16 hours training each week on top of her full-time school load. “To be good at triathlon, you definitely have to make sacrifices,” she says. “It takes good time management and prioritization and it is hard to have a social life outside of triathlon.” For Wagner, who dreams of competing at the Olympics some day, it’s all worth it.