After 9 hours, 56 minutes and 26 seconds I completed the 2013 Hawaii Ironman World Championships. It was my third time on the “big island” and my thirteenth Ironman – Jim actually completed 4 IRONMAN races in the last 12 months (Kona 2012, Cozumel, Zurich then Kona 2013) and this was his fastest time in Kona.

While my run wasn’t quite what I had hoped for, it was still reasonable and I was again reminded just how tough the run course is in Hawaii. It gives me so much respect for guys in my (50-54) age group like Pierre Lavoie from Canada and Wolfgang Schmatz from Germany who ran marathon times of 3:21:02 and 3:11:00 – absolutely awesome!

The highlight of my day was having a stellar bike ride. I covered the tough 180 km course in 4:52:57 at 37 km/h average and felt relaxed doing it. I kept waiting for the ride to get hard for me, but it didn’t.

The weather was “kind” to the athletes this year. The horrid winds that blow in your face from the mountain on the way to the Hawi turnaround and reverse to blow in your face from the ocean on the way back to Kona were noticeably absent. Absent also was the scorching sun which was obscured by cloud cover for most of the day. The conditions were as “ideal” as they can be in Kona.

Key to a good race in any Ironman and in particular in Hawaii is having a well thought out plan and sticking to it. For me it’s simply relaxing in the swim (staying out of the crush), breaking the ride down into 4 sections – with an anticipated average speed after each section, and running the Marathon in 6 x 7 km blocks.

My race on Saturday went almost exactly to plan except for “dragging” a little on the run –  I can put that down to a calf strain which limited my running to just 2 short runs in the 3 weeks before the race. But no excuses, it’s just a tough run course.

Again, the WTC did a fantastic job staging their Ironman World Championships.  Every aspect of the race moves with precision to give athletes a great experience and of course the volunteer and spectator support is just incredible. 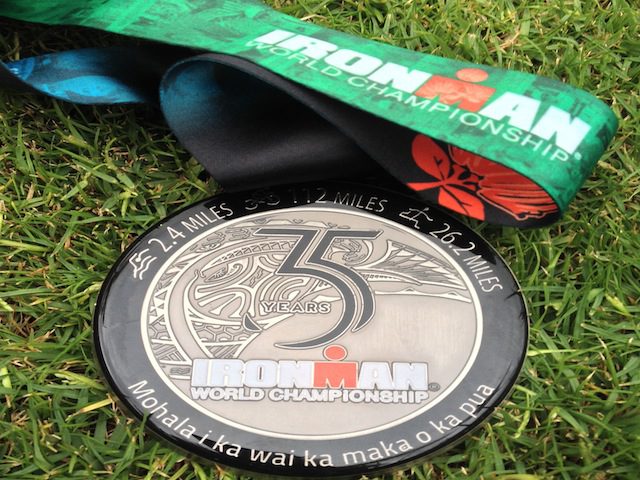