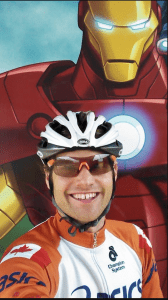 In a dramatic race down under on Sunday, Canada’s Jeff Symonds became the 2015 Ironman Asia Pacific Champion, winning Ironman Melbourne in a blistering 8:04:29. With perfect execution, he steadily made his way to the front throughout the race until he grabbed the lead on the run. Symonds has been posting among the fastest marathon times in his races and today was no exception with a 2:44 marathon time. That put his run time five minutes ahead of the second fastest split of 2:49 which second place Timothy Van Berkel and Brad Kahlefeldt both of Australia, ran to finish in 8:07:57 and 8:09:21 respectively.

Symonds exited the 4km swim in 49:40 about three minutes behind the lead group but rode a powerful 4:27. Only two other men rode faster with Germany’s Nils Frommhold going 4:16. Frommhold’s fast bike seems to have taken the sting out of his legs as he eventually finished 6th. Van Berkel rode less than 15 seconds faster than Symonds. With a calm resolve, Symonds picked off the runners ahead of him for the biggest win of his career. Winning today guarantees him a spot in Kona.

Did that just happen?! I knew that was in there somewhere! Dream big kids-they do come true! #GetUgly!! #IMMelboure @IRONMANAsiaPac

At the finish Symonds told Ironmanlive, “For all the youngsters watching – I grew up in an Ironman town watching this. So I challenge every youngster to dream big.”

On the women’s side the race was fast changing. Two-time Ironman 70.3 winner Australia’s Melissa Hauchildt took the Asia-Pacific title in 8:52:50. She passed race leader Caroline Steffen at about 35 km despite having to stop and get Vaseline for painful blisters. Yvonne Van Vlerken was second in 8:58:50 in a sprint to the end with a dramatic pass of Steffen in the finishing chute where Steffen was stumbling and barely moving. She slipped to third in 8:59:08.

Not the fastest swimmer in the mix, Hauschildt had a strong swim exiting with Mirinda Carfrae in 54:44 about two minutes down from the leaders. Her bike split of 4:48 put her a solid four minutes behind the top riders Yvonne Van Vlerken and Emma Pooley who both rode 4:44. Steffen went 4:45. It was on the run that Hauchildt made her move with her 3:06 marathon.