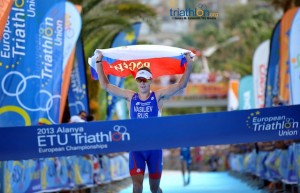 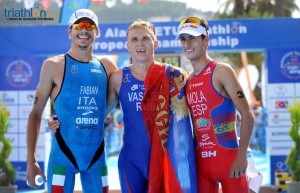 Ivan Vasiliev (RUS) continued his successful season at the 2013 Alanya ETU Triathlon European Championships on Saturday, winning his first European title. Alessandro Fabian (ITA) executed a strong race plan from start to finish for silver, while Mario Mola (ESP) smoked the run yet again to make up nearly two minutes off the bike for bronze, each claiming their first elite European Championship medals.

The amphibious Richard Varga (SVK) led the men around the two-lap swim course and into transition. But his lead was minimal, as Vincent Luis (FRA) and Maximilian Schwetz (GER) followed Varga out of the ocean just a second later. A total of 14 men got their bikes out of transition with an 11-second lead, but that group quickly dwindled down to 10 approaching the first bike turn with a half minute advantage.

Included in the group that broke away was Varga, Vasiliev,  Alessandro Fabian (ITA), Pierre le Corre (FRA), and Dmitry Polyanskiy (RUS). Meanwhile, pre-race faourite Mola trailed in the second group 40 seconds down after the first lap.

By the second lap the group fell to just nine when Polyanskiy dropped to the chase group, then nearly a minute back. After Varga punctured a tire to take him out of the race on lap 4 of the bike, the leading eight had increased their lead to over a minute and a half with one lap left.

A speedy transition saw the top eight head for the four-lap run course with a 1:44 minute lead. Vasiliev took immediate charge, clearing past all the men by the first run turn with Fabian trailing hotly. Behind them, Mola had already slashed 20 seconds off his deficit to come within 1:17 on the first lap.

Vasiliev’s early push paid off, as he gradually increased his lead with each lap over Fabian, Schwetz, and Luis. On the third lap, Fabian put on his running cap, attempting to reel in Vasiliev, effectively dropping Schwetz and Luis.

But the Russian was too strong on Saturday and held his position to earn the European title in 1:42:09. Fabian crossed over seven seconds later in 1:42:16. But the battle for bronze began on the bell lap when Mola smoked the competition and ran himself into third in 1:42:22 despite starting the run nearly two minutes behind the leaders.