PROBABLY THE TOUGHEST RACE IN THE WORLD

It’s set to be one of the most unique races in the history of the ITU World Triathlon Series, that’s before even factoring in the stellar start lists in Kitzbühel this weekend. Instead of the usual Olympic distance format of a 1.5km swim, 40km bike and 10km run, this year’s race in the small Austrian alpine town has been designed around the famous Kitzbühel Horn. It starts with a sprint 750m swim, followed by a 11.55km cycle leg. The bike includes 867m of climbing, with a gradient of between 17 and 22 percent in the final 1km. But the athletes won’t be finished just there, with a final 2.55km run to come, including another 136m of elevation to the finish line at Alpine House. View the course.

Elite Men’s Preview
Kitzbühel is significant when it comes to the 2013 WTS series, as it’s the first time 2013 that the London 2012 Olympic men’s podium will hit the start line together. While Jonathan Brownlee, Alistair Brownlee and Javier Gomez have so far won each of the four titles between them this year, it’s the first time the sport’s three heavyweights line-up against each other this year. What’s more, this race could be critical when it comes to calculating the overall 2013 ITU World Championship. 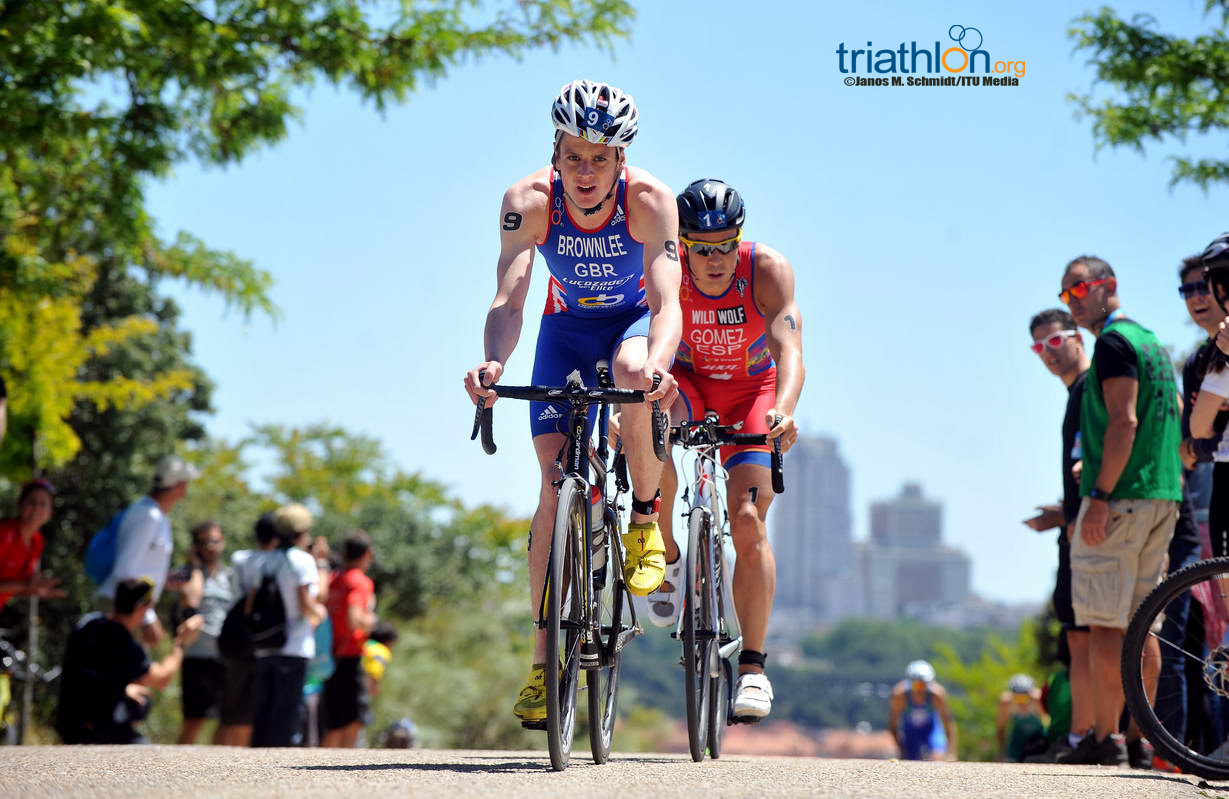 Currently, at the halfway point of the season, Gomez leads Portugal’s Joao Silva by almost 700 points, closely followed behind by Spain’s Mario Mola in third. Defending ITU World Champion Jonathan Brownlee currently sits in sixth place, with two wins from two races, while Alistair is back in 14th place with just one win. A win here for Jonathan Brownlee would be a big step in defending his title, while for Gomez it could be key to claiming his third ITU world title. A win for Alistair keeps him in the frame.

And while it’s wise to keep an eye on the hatrick of Olympic medallists, don’t be surprised if this intriguing course throws up a wildcard. First in line for that honour would have to be Russia’s Ivan Vasiliev. The Russian powerhouse started to show he is a serious contender in Olympic qualification last year. In Madrid last month he broke through for his first World Triathlon Series podium. Just a few weeks later he took home his first European championship. Vasiliev has shown repeatedly he can keep up with the sports powerhouse trio on the bike, and will no doubt attack on the climb.

Also watch for consistent WTS podium finishes Sven Riederer and Alexander Bryukhankov. The Russian has had a rotten year with luck and has hardly finished a race, but when he’s on form he can bike with the best, and Riederer is always a threat. The fleet-footed Mola, Steffen Justus, Laurent Vidal, Vincent Luis and Richard Murray could also be in touch if within reach from T2.

Elite Women’s Preview
The USA’s Gwen Jorgensen has been on fire so far this year and will toe the start line in the No.1 in Austria, but how she has won so far throws up questions about this race. Each time, she’s started with a deficit from the leaders on the bike leg and then used her brilliant 10km run splits to reel in those in front. In Kitzbühel, there is only 2.55km of running track to do that. Unless Jorgensen can leave T2 with the leaders she might not have enough ground to catch them up. 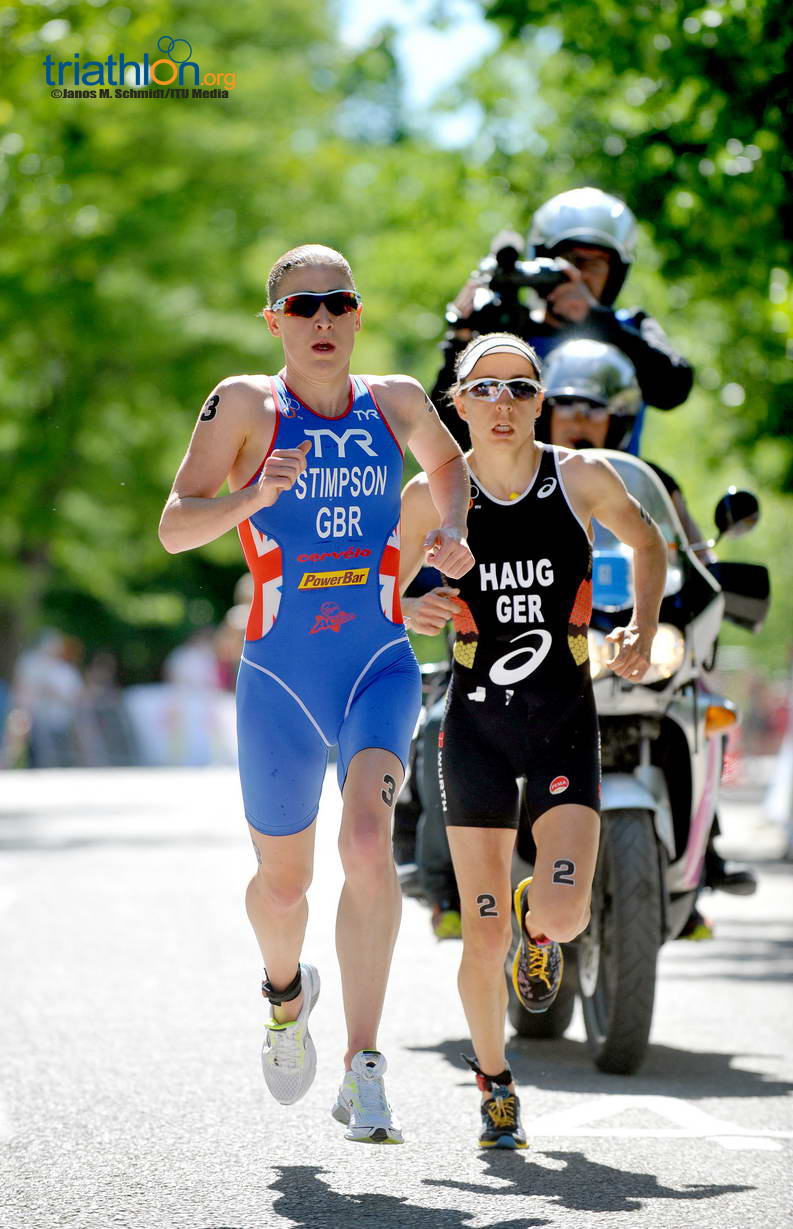 It puts the two women sitting just behind her in the rankings with a good chance to take the overall lead. Sitting in second place is Anne Haug, who has made a name for herself over gutsy solo breaks over the past two WTS seasons. While in the past she’s needed to after usually falling behind across the 1500m swim, the first leg in Austria this year is a sprint, at 750m, and then it’s all about the hill. A solo breakaway off the front from the German wouldn’t be surprising.

Great Britain’s Jodie Stimpson is currently in third place and is another that can’t be discounted on on both past results and current form. In the middle of what is her best ITU year so far, Stimpson can be expected to be in the contenders up front.

It’s also hard to discount two of the season’s other in-form women, Non Stanford and Felicity Abram. While Stanford’s stellar run helped her to climb onto the Madrid podium last month, it’s worth remembering that she claimed last year’s U23 World Championship on a bike course labelled one of the toughest ever, Auckland. Earlier this year Abram did the bulk of the work in a lead pack on the same course, on her way to a bronze medal.

Others that will surely contend include France’s Jessica Harrison, Ireland’s Aileen Reid, the USA’s Sarah Groff, Australia’s Emma Moffatt and Ashleigh Gentle, New Zealand’s Andrea Hewitt, Nicky Samuels and Kate McIlroy. McIlroy already has a fondness for scaling mountains on foot, she won a world championship in mountain running in 2005. It’s been an outstanding year for the Netherlands team, so also keep an eye on Maaike Caelers after scoring a silver in Auckland and Rachel Klamer breaking through to win her first European title just last month.

The elite men start the day in Kitzbühel at 1.05pm local time on Saturday July 6, while the women will follow at 4:25pm. Follow the events live @triathlonlive and online at triathlon.org/tv.

Don’t miss your chance to have your message to the athletes beamed around the world via our #yousaywespray competition. Simply follow @worldtriathlon on Twitter or be a fan of www.facebook.com/worldtriathlon, and send us your message (limit of 25 characters). We will then choose a selection of the best messages and spray them on the climb for millions of people to see.