Canadian and Ironman All World Athlete, Amanda Wowk has been accused of course cutting at IRONMAN Mont-Tremblant. Highlighted on Marathon Investigation, Wowk has a finishing time of 16:51:30 on Sportstats, while a video of her crossing the line in 13:25:53 with no chip on her foot. Derek Murphy, author of the article, confirmed the results with the Time of Day Finish based on the runners that finished immediately before and after her. He also confirmed this approximate finish time with officials at Sportstats.

On Strava she posted the following manual entries:

Wowk has a stand-alone marathon best of 4:49:53 and recently ran the Edmonton half marathon in 2:39. 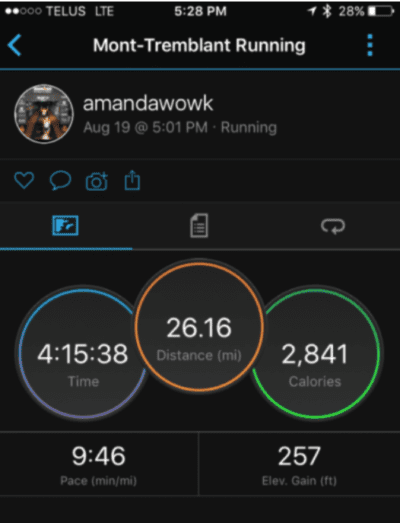 Murphy contacted Sportstats and later learnt that she also submitted these falsified entries to Ironman. During Murphy’s investigation, Wowk repeatedly withheld the files due to privacy concerns. After receiving the fake files, Murphy informed Wowk that he knew the data was fake. What followed was an admission of guilt: “She did apologize for falsifying the data and admitted to cutting the run portion at Mont-Tremblant – ‘I DID NOT COMPLETE THE ENTIRE RUN. I WANTED TO, I STRUGGLED.'”

However, there’s reason and evidence to show that Wowk cut the bike course. She crossed the 162K checkpoint at 4:33:44 PM and missed the 170K timing mat. When she passed the 180K checkpoint, it was 4:50:13 PM. In 17 minutes she covered 18K. Cody Beals, the overall winner and current holder of the bike course record biked this section in over 28 minutes.

Wowk has been disqualified from Mont-Tremblant, as well as IRONMAN 70.3 St. George.