You want tough? Try pulling your son on a raft for 2.4 miles. Then pushing him on a bike for 112-miles in the hot sun. OK, hot sun doesn’t begin to cover it – blazing hot sun? – and winds that would stop most mortal beings in their tracks. How about finishing the day with a marathon, once again pushing your son every step of the way.

That’s what Dick Hoyt in 1989 and 1999, pulling and pushing his son Rick through the famed Ironman World Championship course in Kailua-Kona, Hawaii. The videos of their Ironman finishes were the most popular the company ever produced, and the YouTube video you can watch below has over 3.4 million views. If you haven’t seen it, good luck getting through it with dry eyes.

Today we learned that Dick Hoyt passed away in his sleep. In addition to their many inspirational triathlon finishes (257 in total), Dick and Rick Hoyt completed 72 marathons including 32 Boston marathons.

I am deeply saddened to hear of the passing of Dick Hoyt, a @bostonmarathon legend. Dick epitomized what it means to be Boston Strong and inspired so many along the way.

Boston will always miss you. Rest In Peace, my friend. https://t.co/VfL0uFpnYy 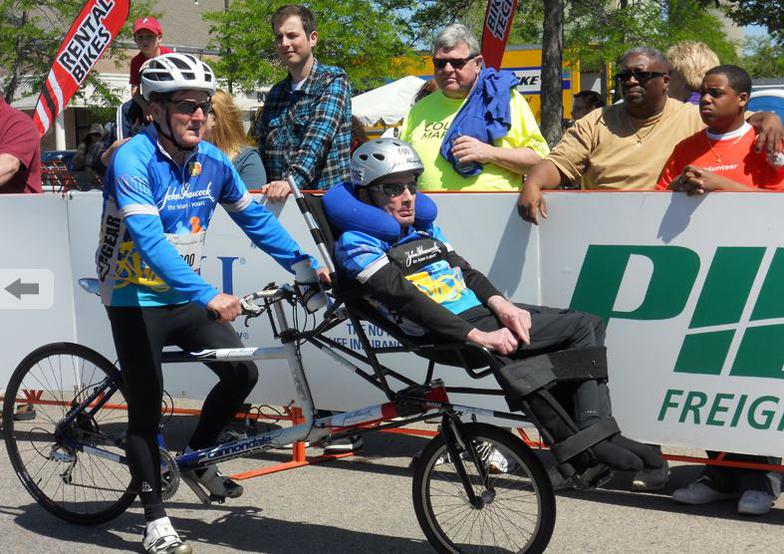 The story began when Rick was born. At birth the umbilical chord suffocated him for a few minutes, leaving him paralyzed and unable to talk. In 1977, Rick asked his dad to push him through a running race. Within a few years they had completed their first marathon. Then came triathlon events. Then came the Ironman.

They were at the first full-distance race I ever competed at, the Bud Light Endurance triathlon in Cape Cod – organized by Boston Marathon race director Dave McGillivray. I didn’t really see them that day, but I did see them when they came to compete at the Guelph Lake Triathlon here in Ontario in 1988 as they were preparing for their first go at the Ironman World Championship. I still remember watching in awe as Dick towed Rick around the swim course in Guelph Lake in a raft, run with him in his arms up the steep hill to transition, then pedal away on that heavy-duty bike before finishing the day by pushing Rick along in a running stroller. They didn’t finish their first go in Kona, but a year later I was in Kona when they did get across the line. The coverage of their amazing achievement on the Ironman show that year was truly unforgettable.

A decade later they did it all again.

“Dick Hoyt showed the American public what a father will do for his son when he not only refused to institutionalize Rick, but made the decision to include him in his racing and training,” fellow Ironman Hall of Famer and Ironman historian Bob Babbitt wrote in the book “25 Years of the Ironman World Championship.”