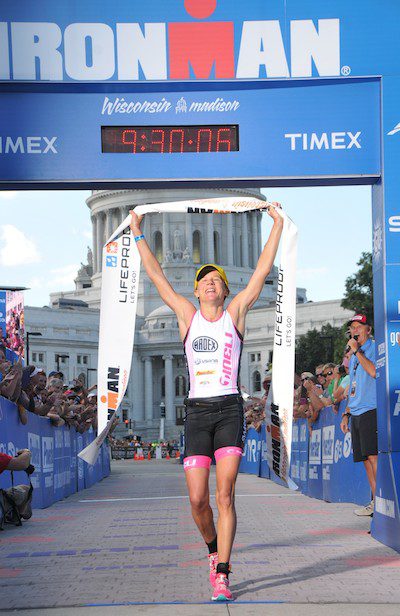 In an effort to independently highlight the effort and achievements of male and female professional triathletes, Ironman has implemented a new race structure for select Ironman and Ironman 70.3 events in North America for the 2016 season. The pilot race structure will split male and female professional fields in races that fall on the same weekend. The select races (four Ironman events and two Ironman 70.3) are some of the oldest and most prestigious in Ironman’s history. The structure ensures that both male and female athletes will be able to compete on the same race weekend.

Ironman CEO Andrew Messick explains that this new structure emphasizes Ironman’s commitment to constantly improving their races and that this is “an important step in the next progression of competitive racing.” The concept also comes highly encouraged by professional athletes on the company’s new Women for Tri board. Messick says he looks forward to the unique opportunity “for each athlete field to shine”.

Here is the schedule for the 2016 North American season:

“It is good to see WTC attempting to create a fair Ironman race for both male and female professionals. However, WTC has already decreased the number of 70.3 races in North America and therefore limited the amount of racing pros can do in a season. I see this move as yet another limitation. I do not agree with forcing males and females to do one race versus another, particularly for significant “national” races such as Ironman Canada. My only hope is that this will somehow lead to more complete and focused media coverage of the women’s pro field at these races where they are featured.” – Multiple Ironman 70.3 winner Rachel McBride

“I like racing with the pro women as I like sharing in the accomplishments of friends and training partners.  It was great to see fellow Pentictonite Jen Annett put down an awesome race at Whistler when I had a rough one.  I also enjoy the opportunity to learn from the women about racing and professionalism. The more pros, the better the impact.  You also see more media attention being brought to races because of the women’s race (i.e. witsup.com).  The more pros there are, the more there will be media and the public taking notice of the races.

Splitting the prize purses further shows that nothing in this sport is guaranteed.  As professionals we need to provide value to race and the series.  I have always believed that prize purses are earned before race day.  Race day we just decided how the prize money will be distributed.   If you are a professional and you want a specific race to continue to have prize money, do something about it.  Contact the race director and ask what you can do to provide value to the race.” – Ironman Champion Jeff Symonds

“Last Sunday at Subaru Ironman Canada, the lead man rolled into T2 with two policeman (sirens on!), a lead vehicle, plus all the fanfare from the crowd. It felt like the emperor was arriving. When the lead woman arrived she was just one in the crowd. Some fanfare, yes, but no empress treatment. This got me thinking: how cool would it be to create a situation where the women’s race can be spotlighted in the same way the men’s race is? This new initiative from Ironman, in association with the Women for Tri Board, could create just such a situation if executed well. If the start times are suitable to allow the women to cross the finish line first, that would be an amazing thing for the sport and for women. I hope Ironman will make that happen.”  -Ironman Champion and President of TriEqual, Sara Gross