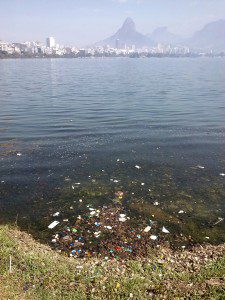 A human arm has reportedly been photographed floating in the waters of Guanabara Bay, close to the Rio 2016 Olympic and Paralymic sailing courses. Water contamination remains an ongoing issue for the Games’ organizing committee.

Rio de Janeiro made a commitment for cleaner water as part of its bid for the 2016 Summer Olympics, but so far it seems like little has been done to fix the problem. Water levels remain unsanitary with pollution, trash and now human body parts floating off the coast. It’s an environmental disaster that has steadily worsened over decades.

Back in 2009 when the city made its bid for the Games, they knew they would need the next seven years to improve water conditions by the promised 80 per cent. But without a widespread modern sanitation system and an economy in recession, progress isn’t as far along as it should be by now.

“The situation has improved compared to what it was before, with the barriers and the boats and the pipes around Guanabara Bay,” IOC executive director Christophe Dubi told reporters in a recent interview. “It’s become very challenging from an economic standpoint, so what (Rio has) done already at this stage is much improved from what the conditions were at the time (the city won the bid). It’s not 80 percent (as the bid promised), but it has improved since 2009. I say it’s already a super-achievement. … It’s the Games that played a catalyst role in developing infrastructure that will help citizens.”

Fortunately for triathletes, Guanabara Bay is not the site of the swim start. Copacabana Bay, a popular tourist beach destination, has much cleaner waters make it safer for swimming. Still, triathletes are concerned about their health while competing.

American Sarah True, who placed fourth at the Rio triathlon test event last August, told ESPN she is going to be careful. She plans to travel to Rio just before her event, missing out on most of the games. She will not be swimming in the Copacabana Bay waters before the event.

“From everything I understand, the worst that can happen with the race is that a couple of days later, I might get a little sick,” says True, who finished fourth at the 2012 Olympics. “In the very large scheme of things, that’s a risk I’m willing to take. I’m far more concerned for the people who live there, who were made these grand promises to improve their environment.”

Water contamination is an issue that has plagued triathletes in the past. Canada’s Kirsten Sweetland caught a parasite that kept her our of racing for the majority of 2015. She believes the bug came from the polluted waters in Stockholm where she swam for a world cup event.