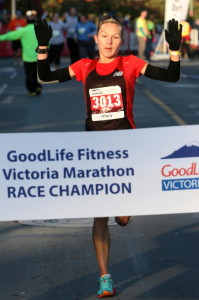 Hilary Stellingwerff spent the holidays in the Patagonia region of Chile with her husband, Trent, where they sent an email newsletter out to fans telling them she is pregnant with a baby boy.

Stellingwerff, an Olympian in 2012, and multiple time national champion over 1500m, has been one of Canada’s premier middle distance runners for nearly a decade. She currently lives in Victoria, B.C.

“This actually isn’t that uncommon. […] It’s just the way doctors count back,” said Stellingwerff. “There’s not much going on at that point. I did feel really tired the week leading into the half and I thought that was a bit strange since I was tapering, but sometimes I feel sluggish when I cut training down so I wasn’t too concerned. I felt great in the half and was pleased with my race. A few days later I had a positive pregnancy test, which Trent and I were hoping for, so we were thrilled.”

Hilary and Trent were hoping for a baby this year. The timing will allow Hilary to resume training in the fall after her due date at the end of June, and she plans to continue training as far along into the pregnancy as she and Trent feel is safe for her and the baby.

Trent is an exercise physiologist and sports nutritionist. He was also a varsity runner at the University of Guelph.

“My plan is to continue to stay as fit as a I can over the next year and then hopefully have a good recovery after the baby’s born so I can be back for the 2015 outdoor season,” said Stellingwerff. “With that being said, my main goal is to focus on 2016 Rio so I would rather do things right than rush coming back and get injured.”

Other notable Canadian track and field and running athletes, such as Krista DuChene and Jessica Zelinka, have put on hold a season of competition to have a child and come back ready.

“Since we’ve just started telling people I’m pregnant, I have only connected with a few other athletes about training. Super-mom and marathoner Krista DuChene has been great with sending me lots of great advice and tips.”