Melanie McQuaid checks in with Heather Wurtele after her win at Ironman 70.3 Monterrey. 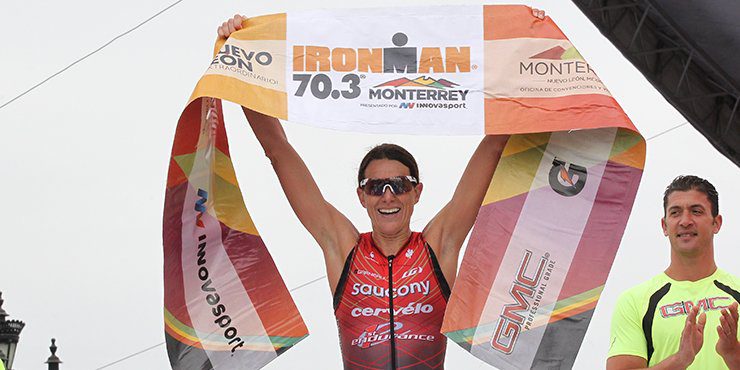 A second place finish at the 2015 Ironman 70.3 World Championships solidified her dominance in the half distance. With a win to kick off her 2016 season in Monterrey, Mexico last weekend, Heather Wurtele looks to be picking up right where she left off last year. Finishing in front of Denmark’s Camilla Pederson and Australian Mirinda Carfrae thanks to an exceptional bike and run combination, Wurtele earned herself the top spot on the podium.

After a late finish to the year at Ironman 70.3 Cozumel in November, both Wurtele and her husband Trevor chose to stay at home in Kelowna for December. This was a departure from the normal plan to fly south to train with Paulo Sousa’s squad in California in the winter. A short recharge with some skate skiing in December left both with fresh legs to get to work in the garage in Kelowna. Then it was off to St. George, Utah to put the final touches on their form before the season started.

Before Monterrey, we asked Wurtele what the “theme” for 2016 is.

“The main theme, as it has been for the past couple years, is to win big races, against great competition,” she said. “With the field at Monterrey this year, it looks like I’ll have to be really hitting the ground running. A big goal is to keep climbing up podium spots at Ironman 70.3 World Championships and to finally have a solid (mechanical free) race in Kona.”

With a dominant win in Mexico to start the year, it looks as if the plan is coming together. Heather told us the race wasn’t smooth from start to finish.

“With the canal swim it was actually a little rough at the start and I wasn’t able to get out of the mayhem on to the feet of Camilla as I had hoped,” she explained. “I know that there were four people in front and that two of those were Camilla and Karen (Thibodeau), but wasn’t sure who else. Fortunately, my ride legs were on fire and everyone came back to me pretty quickly. The rest of the day was just nose in the wind trying to build a solid lead and I didn’t really see people much when I kept an eye out on the few out and back sections.”

Wurtele stressed how much she enjoyed the race venue. “The swim is really unique – point to point in a “canal” but it feels more like a giant fountain or swimming pool. The ride is fast with some cobble sections through town to keep it interesting, and the run course is really fun with twists and turns, stairs and ramps along the canal. The race organization is great and I love the crowd support in Mexico. People are super stoked about triathlon and everyone wants to talk and get a photo with you. It’s a great vibe, and I feel really fueled by the positive energy.”

Although she indicated her swim was not what she had hoped based on how solid her training has been over the winter, overall she had a strong day where she was able to push hard.

“On the bike, I felt awesome!” she said. “I set some new standards for myself in my winter trainer ride block and Trevor and I have been training in St. George for the past month where the riding is phenomenal. I was definitely happy to see my hard work pay off in the race and my ride definitely helped cement my lead.”

The only disappointment of the day was fellow Canadian and defending champion Magali Tisseyre sitting out of the event due to illness.

“I was super bummed for Magali,” Heather said. “We are friends, teammates on the Triathlon Squad and competitors who have a lot of respect for one another. It is awful to travel all the way to a race, have the lead up go awry and get sick. I know it must have been super hard for her.  As the two previous winners of this race — I won the inaugural even in 2014 and she won with a dominant performance last year — it would have been great to go head to head for the title! I have no doubt she would have made the win harder to get.”

It was an exciting day for Canadian long course racing with Wurtele winning and husband Trevor taking second in the heavily contested men’s event. It should be an exciting year for all of the strong long course athletes Canada has racing at long distance events worldwide. The next half distance event in North America will be Ironman 70.3 California on April 2nd and Wurtele plans to be on the start line.