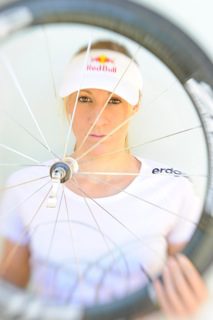 Swiss triathlete Daniela Ryf has made quite an impression on the 70.3 and Ironman scene. In her rookie year Ryf has accomplished more than some of the top triathletes would throughout an entire career. Not only did she win the 2014 Ironman Zurich, she did it backed onto her win at the 5150 Olympic distance race the day before. Shortly after she captured Europeans hearts with her win at the 70.3 European Championships, in Wiesbadden. Two weeks later she entered the Women’s Sub-nine hall of fame where she again dominated the field at Ironman Copenhagen. Within weeks she brought it to Canada, where she won the Ironman 70.3 World Championship. Already a force to be reckoned with Ironman bike splits of 5:00:18 (Zurich) and 4:44:09 (Copenhagen), Ryf’s potential at Ironman distance is huge. Still, it was humbling to hear that even the 70.3 World Champion has tough days. When I caught up with Ryf in Cozumel after her race, the first thing she said about Tremblant was “It was really tough.”

Brooke Brown: Can tell me about your day in Tremblant?

Daniela Ryf: Yes, it definitely was a tough day. I didn’t feel great going into the race, so I was just focused on what I had to do. I knew it’s not going to feel nice, but it can still be fast. That’s why I really tried to push it out there on the bike. My legs came good after a while and I used the breakaway to build myself an advantage for the run, knowing some muscles where still sore from Ironman Copenhagen I did just weeks before. I was happy to hold it together on the run and bringing home a world champ win was amazing.

BB: After Ironman Copenhagen, you tweeted that ‘all along you have been playing in the wrong sandbox’. How do you feel that the Ironman and Half distance play to your strengths?

DR: I definitely noticed that I can take better advantage of being a strong biker over the longer distance. I’ve always been able to run solid after a hard bike and this is exactly what you need in Ironman and 70.3. For the World Cup races (ITU) you need a lot of speed, which I didn’t seem to have enough of. 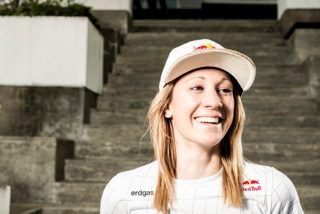 BB: What prompted the switch over?

DR: It was my Coach Brett Sutton. I did Ironman Zurich as an experiment, thinking I am totally not ready to do this. I was not even sure if I could sit on the bike for 180 km. That’s why I was quite surprised how good I felt when I started the run. I’m happy I tried it and am pretty amazed how this season turned out, as I never even thought about racing in Kona.

BB: Do you enjoy the Ironman distance?

DR: Ironman distance is still quite long. I want to get fitter, so I can go all out for 180 km. So far I can’t do it yet. But I’m motivated to work on it till I’m there.

BB: Leading into Hawaii, you are training in Cozumel. In your eyes, what are the some of the benefits?

DR: Cozumel is very humid and similar in terms of heat to Kona. So it’s the perfect place for my preparation. A big advantage is that it’s quiet. We are the only group on the island [Brett Sutto: Trisutto squad], and it isn’t bombarded with other athletes. We have everything we need here.

BB: Kona is just your third Ironman race ever. As a Kona rookie, how are you feeling going into the race?

DR: I’m exited to race. I feel fit and ready. I just want to go out there and have a blast. Going hard is how I like to race, and I am sure Kona is going to be a very tough race. It feels kind of funny to be a part of it as I never was planning to race there. I’m interested to see what Kona is going to be like!