Kirsten Marchant has been winning races in Ontario for a few years now, but since going pro on the Ironman 70.3 circuit, she’s quickly becoming known across Canada. Marchant had a breakout win in her first half iron distance at the 2014 Niagara Falls Barrelman Triathlon (with a 1:20 half marathon off the bike!). Taylor Reid checks in with the neo pro. 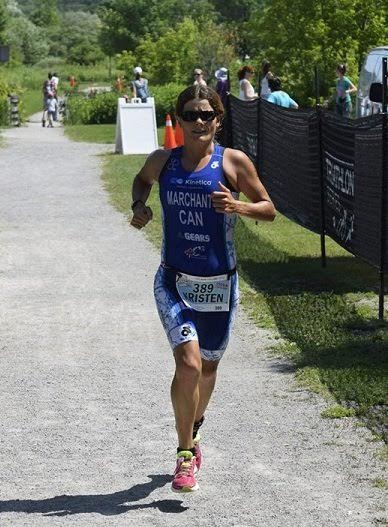 Year of Birth: 1991
Height:  163cm
Coach: Self-coached with guidance from Barrie Shepley
Education: Graduated from the University of Waterloo in 2015 with a BSc in Health Studies.

Taylor Reid: What distance in triathlon do you compete at?
Kirsten Marchant: Primarily Ironman 70.3 because the non-drafting Olympic distance pro racing disappeared at the beginning of 2015. Ideally I would have focused on the Olympic distance for two to three years before focusing on the half ironman distance.

TR: Where are you from?
KM: I was born in Australia, moved to Canada in 2001. I am currently living in Hamilton, ON.

TR: How did you start racing triathlon a professional?
KM: After winning my age group at the World Championships (Olympic distance) two years in a row and winning Barrelman by 19 minutes, it seemed that the time was right to move to the pro ranks, which also coincided with graduation from university.

TR: What was your first Triathlon Race?
KM: The Milton Triathlon, a local 750m-30km-7.5km race in Ontario.

TR: Do you have any family members who compete in the sport?
KM: My brother was actually the reason I got into triathlons as he was willing to drive me to the races he was doing the first year I competed in the sport. He recently did Ironman Muskoka but is now living in Australia.

TR: What do you think about when you hit a rough patch in a race or when you need to dig deep?
KM: I wouldn’t be satisfied if I didn’t give it everything I had. Also, there is food at the finish line, and massages–good incentives to get there quickly!

TR: What is your favourite food?
KM: Chicken.

TR: What drives you to train every day and be the best athlete you can be?
KM: It’s fun!  There is definitely a feeling of accomplishment after doing a hard session, and I like to go fast, so anything that will make me faster is good.