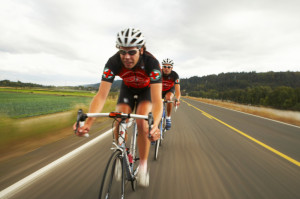 A Boston-based startup company that provides races in the United States with free race photos may be expanding into the Canadian market.

Gameface Media, founded towards the end of 2012, provides runners, triathletes and cyclists, among other sports, with free access to up to 10 pictures of themselves. The photos are free to race participants to use for personal use  and sharing on social media and with friends. Revenue is generated from race hosts and sponsors who get their logo on the bottom corners of photos. All participants have to do is “like” the sponsor’s Facebook page.

The company, which hires 800 professional freelance photographers across the United States to work at events, believes they can combat the apathy to  and circumvention of traditional advertising online by linking enjoyable and positive experiences of participants with sponsorship advertising.

A video on Gameface’s website claims there is a 90 per cent click-through rate on emails they send to people notifying them their photos are ready, an impressive number by advertising and email blast standards.

In 2013, Gameface gave away a million photos to runners, but are experiencing huge growth. They expect to give away 20 million photos in 2014 to two-and-a-half million participants, and 40 million in 2015.

Next year the company will tackle the San Francisco Marathon, their first major city marathon. The race attracts about 25,000 runners each year.

Gameface, in addition to planing an expansion into Canada, hopefully this summer, is also looking at moving into European and Australian markets.

Still, this isn’t the first company to offer free race photos to Canadians. ZoomPhoto.ca, a Canadian company based in Nepean, Ont. has been offering runners free race photos alongside their race entry fee for over a year. The group, which has been offering professional race photographs for over a decade, realized recently that they had to offer a new way of getting their product to customers and changed their business plan.

Runners in any of the 41 races across Canada that ZoomPhoto works with will have race photographs included in their registration fee, just like race shirts and finishing medals. The difference is ZoomPhoto’s pictures come unmarked and the cost is included in entrance fees.

An earlier version of this article did not note ZoomPhoto.ca.