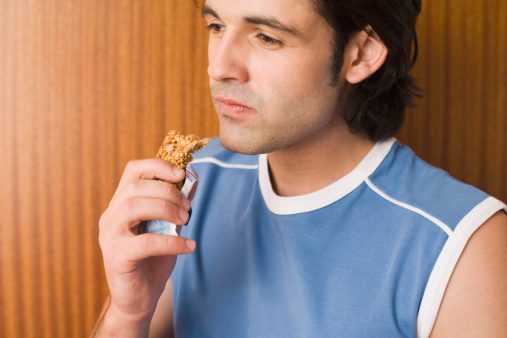 We’ve all been there, staring at the shelves in the grocery store, trying to decide which breakfast cereal, granola bar or flavoured water we’re going to purchase when we end up reaching for the brand with a fitness claim on the package.

What is more disturbing is that researchers have discovered this type of food label may actually undermine healthy eating and exercise habits. A study published in the Journal of Marketing Research discovered that the branding of foods as fitness options compelled study participants to over-consume, as well devote less effort to their later workout.

All participants in the study were what researchers termed “restrained eaters,” meaning they were watching their weight. Participants were given snacks labelled either “Fitness” or “Trail Mix” and told to act as though they were having an afternoon snack at home, and eat accordingly.

What researchers observed was that consumers trying to watch their weight significantly over-consumed fitness food. These participants also gave less of an effort in the workout portion of the study, when participants were asked to cycle on a stationary bike.

Most of us know (in the back of our minds, sometimes way back) that many energy bars and sports drinks are pretty much chocolate bars and sugar water with a different marketing strategy. Sometimes these foods do have a place in an athlete’s life, such as after a hard workout or long run, when the body is depleted and their isn’t a kitchen immediately available to make an all-natural snack. What athletes need to be wary of is allowing themselves to think that because something is labelled as a “fitness food,” that it can be consumed in large quantities without consequence, or that such a “healthy” choice allows one to slack off in a later workout.