Zipp sent us one of the first sets of their new 808 NSWs, which we put to the test. And, yes, they’re as fast as you’d imagine.

As if they weren’t making fast enough products, the folks at Zipp have come up with a new category of wheels called NSW, which are “finely tuned versions” of what are already pretty speedy wheelsets. The NSW relates to a room in the Zipp factory they affectionately refer to as the “Nest,” a windowless room where the Zipp engineers try come up with new ideas for faster products.

What’s crazy about the 808 NSW is that Zipp is fine tuning a wheel that is already very fast. They started with a new rim shape that is slightly wider than the regular 808, but remains 82 mm deep. While the new shape cuts through the wind better (read, its faster), it also makes the wheel more stable and less likely to get pushed around in cross winds. (If you want to get really technical, the 808 NSWs peform better at higher Yaw angles and the centre of pressure is moved over the steering axis.) The entire package adds more speed to your race – in addition to the aerodynamic gains, a better handling wheel will allow you to ride faster because you’re going to be able to stay on the aero bars for longer. 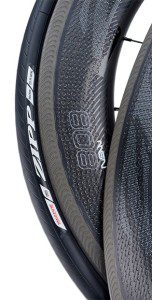 It isn’t just the shape of the wheel that contributes to better performance. There’s a new dimple pattern used in the rim to help with aerodynamics and the graphics are printed right onto the rim, so there are no decals to add, you know, that extra nanometre of potential drag. In addition to all the speed enhancements made on the new rims, there’s also improvements to the Showstopper brake track so the 808 NSWs provide better braking, too.

All that is just the rim. Of course the engineers stuck in the Nest didn’t stop there. The hubs on these wheels use Axial Clutch technology, which reduces drag by disengaging the ratchet system when you’re coasting. The rims are also designed to provide a bit more lateral stiffness, which also enhances performance.

Yeah, yeah. It all sounds great. A bunch of engineers coming up with ways to make a wheel faster, but does all this make a difference in the real world? While we didn’t get a chance to test the 808 NSW’s in a race scenario, we did get to put them through their paces through a three-day climbfest in California earlier this month. While you wouldn’t normally use an 808 for long mountain climbs and descents, the rides through the Santa Monica mountains provided a great opportunity to test the 808 NSWs in some challenging conditions. (And, at just 1,810 g for the wheelset, it’s not like the 808 NSWs are too heavy for climbing.)

The first thing you’ll notice if you’re moving from the regular 808 wheels to the 808 NSW is that wider rim width. You will have to adjust your brakes accordingly. The other thing that is a bit of a surprise is just how quiet that rear hub is when you’re coasting.

One of the best ways I’ve found to test the lateral stiffness of a wheel is to climb in a hard gear. On the first day of riding I neglected to change the rear cogset, using an 11-25 coupled with the 54 front tooth chainring that I’m reviewing on SRAM’s 1X gruppo. I have no idea when that seemed like a good idea, especially as we took on the famous Rock Store climb, but it certainly gave me the opportunity to prove that the 808 NSW wheels are plenty stiff. Since I did pretty much all the climbing on the first day out of the saddle, I put the rims and hubs to the ultimate lateral stiffness test. While I am 80 pounds short of the 250 lb maximum weight the NSWs are rated for, I can confidently say that pretty much any triathlete will be able to pound on these wheels and get great results. In terms of being able to test the raw speed of the wheels I was shocked at just how fast the 808 NSWs got going on descents. I was more than pleased to find that the braking was every bit as solid as promised, too, allowing me to maintain my speed for just a hair longer than I would normally heading into the switchbacks because I was confident of the stopping power.

After my “power test” ride on the first day I was smart enough to change the cogset to give myself some easier climbing gears for our second day of climbing. This day started out with a bit of rain, which allowed me to test Zipp’s claims that the new Showstopper brake track was better in wet conditions. I am happy to report that it is – I was more confident on the downhill descents even in the wet conditions than normal. We also had a stretch along the Pacific Coast Highway, which gave me a chance to test the wheels in a more typical triathlon race scenario. Riding in the aero position was a breeze and even a slight cross wind wasn’t an issue.

So, is there anything not to love about the 808 NSW wheels? Not really, but there are a few things to think about. Even though the 82 mm deep rims are designed to be better in cross winds than regular 808s, they’re still really deep and there are times when you feel like you’re getting blown around in high winds. (Which is why you’ll see a lot of folks race in Kona with a 404/ 808 combination.) They’re also a pretty stiff wheel, so you’re going to feel more of the road vibration. That shouldn’t be a factor for racing, where performance is worth a bit of a stiffer ride, and I can’t imagine most people are going to be doing the majority of their training on this wheelset.

While we weren’t able to test the 808 NSWs in a fashion that would enable us to confirm the three- to four-watt improvement in aerodynamics claimed by the folks at Zipp, it isn’t a stretch at all to say that the 808 NSWs feel faster and perform better than the regular 808s, which is why many of the top contenders in Kona were on those wheels last year, and why you’ll see even more pro triathletes and cyclists on them in the future.

The crew stuck in the Nest have already come up with a new version of Zipp’s flagship 404, which should be a riot to check out. Who knows what they’re dreaming up next, but we’ll certainly be looking forward to finding out.