A mouth blister, foot blisters, hypothermia and intense rain weren’t enough to prevent Mary Beth Ellis from taking her third Ironman Mont-Tremblant title, while fellow American Chris Leiferman took the men’s title in his first long distance race, marking yet another unforgettable day of racing in Quebec. Canadian Stephen Kilshaw finished an impressive third to give the home country a presence on the podium.

As has become the norm at Subaru Ironman Mont-Tremblant the “this race is unlike any others in Canada” experience began this morning with a fly-by by a Canadian Forces CF-18, which timed it’s second run past the start line at exactly the same time as the pro men started.

The water was warm enough so that the pros weren’t allowed to wear wetsuits, which became a bit of an issue for Ellis, who started to get cold about halfway through the swim. By the time she exited the water behind former All-American swimmer Amanda Stevens, Ellis was visibly shivering.

And there was blood coming out of her mouth. Turns out she gets blood blisters in her mouth when she’s stressed and this one popped, adding to the challenges along her way.

Ellis didn’t take long to power her way to the front of the race during the bike and, by the end of the very wet ride, had a lead of over 12 minutes on Laurel Wassner.

The run wasn’t the end of Ellis’ woes, though. She’s had fractures in the metacarpals of her feet, which has given her “hammer toes,” which, thanks to the wet conditions, started to get blisters. Things got so bad that she finally stopped at an aid station and cut some holes in her shoes in order to keep going.

In the end her marathon wasn’t as fast as others she’s run, but it was more than enough to hold Wassner off for the win. Rounding out the top three was American Jessica Jones. Wassner was still thrilled with her race as it gives her enough points to earn a trip to Kona this year. 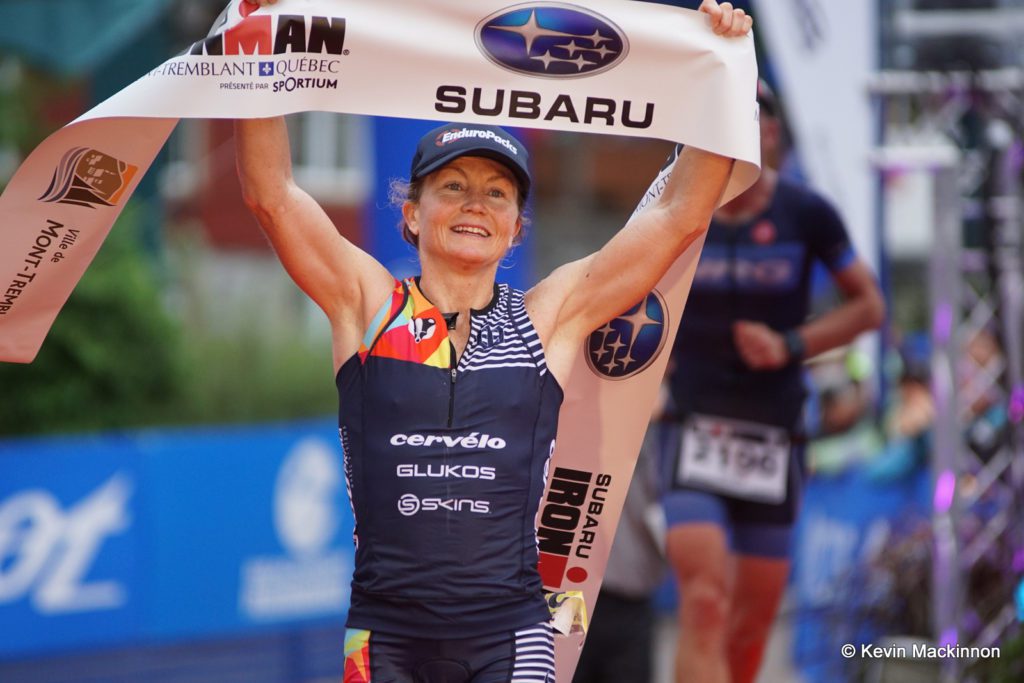 Eric Limkemann (USA) and Paul Matthews (AUS) led the way out of the water with Romain Guillaume (FRA) on their heels. Guillaume would eventually find his way to the front of the race on the bike and enjoyed a lead of just under four minutes over Rapp as he started the ride, but it was the fast-riding Rapp who was dictating the pace through the second half of the race.

Rapp felt like he’d pushed hard enough to tire out the competition on the run and he was mostly right – except for one exception. Guillaume would eventually pull out of the race, leaving Rapp in front, but Lieferman surged to the front just before the halfway point of the marathon thanks to a 1:20 half-marathon split.

While Leiferman would slow down a bit (1:25 for the second half-marathon), his 2:45 marathon was more than enough to take the men’s title. Rapp finished second and gained enough points to qualify for Kona again. Rounding out the top three was Victoria’s Stephen Kilshaw, who set a new personal best.

“It was an epic day,” Kilshaw said after his race. “There’s no other way to describe it. It felt like you were in a tent with the rain pounding down on your helmet. On the first lap I got thinking ‘this is badass.’”

Kilshaw proved he can be a badass Ironman competitor, too, holding off Matthews by five minutes to earn that final spot on the podium.