Jan Frodeno and Daniela Ryf might have taken both the Ironman 70.3 and Ironman world titles this year, but 57-year-old Ellen Hart, from Denver, Colorado, just did them three better. In addition to winning the women’s 55 to 59 category in Zell am See-Kaprun, Austria (70.3 worlds), Hart journeyed to Chicago last month to compete in the sprint- and standard-distance world championships at the ITU Grand Final. She took the sprint title on Thursday, then followed that up with the Olympic-distance championship on the Saturday. A few weeks later it was off to Kona where, you guessed it, Hart took her second consecutive age-group Kona title (she won a third in 2010). Then it was off to Adelaide, Australia, for the world duathlon championships, which rounded out her stellar six weeks and five world championships.

Last year Hart arrived in Mont-Tremblant trying to overcome a knee injury that had kept her from running for months. She surprised herself with a win in Quebec, then followed that up by winning her age group in Kona, too. This year she topped that impressive season, and then some. 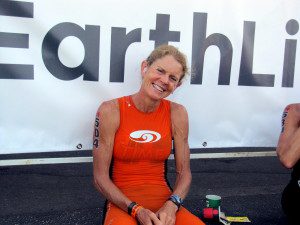 Hart’s journey to the top of the age group ranks hasn’t been an easy one. In 1980 Hart finished third at the US Olympic trials in the 10,000 m, which was to be run as an exhibition at the Olympic games that year. Shortly after that the US would boycott the Moscow games, dashing her dreams of competing at the Olympics. Four years later Hart was back on the line at the Olympic trials, this time in the marathon and as the reigning world record holder over 20 km and the American 30 km record holder.

In addition to all those running feats, Hart had managed to graduate from law school and get herself a job at one of Denver’s most prestigious law firms. As if that wasn’t enough Hart married Denver’s mayor, Frederico Pena, who would eventually become a cabinet member in President Bill Clinton’s administration.

Hart managed to juggle all this despite the fact that she was dealing with an eating disorder that had begun when one of her college coaches told her she needed to lose weight. Like so many “type-A” high achievers, Hart took the coaches words to heart and became a “high-functioning” bulimic. It wasn’t until she became pregnant with the first of her three children that she managed to get a handle on the disease. (In 1996 Hart’s story was made into a movie “Dying to be Perfect: The Ellen Hart Pena Story.”)

Like so many runners, Hart gravitated to triathlon thanks to a running injury – plantar fasciitis that sidelined her for a couple of years. Her husband bought her a bike and, even though she dislocated her shoulder on her first ride, she quickly became hooked. She added swimming to the mix and did her first triathlon in 2007. By 2008 she had qualified for Kona, and would take her first age group title a couple of years later.

Whether she heads back to Kona or not, Hart has certainly set a record over the last six weeks, dominating so many different facets of the sport. One has to wonder if her Timex Multisport team-mates are trying to convince her to stop in Maui this weekend to take on the Xterra world championship, too.

Five is probably more than enough, though, and she really does deserve that break.