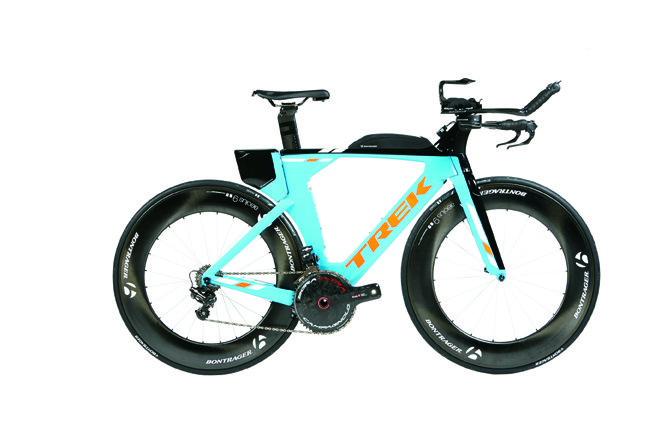 I first reviewed the Trek’s Speed Concept 9.9 in our September issue. I loved it then, but after riding it for seven months now I can say with certainty that it is my personal bike pick of the year. It’s one high performing machine. Although it is specced for a top-end price point, it shares much with the mid-range 7 Series in the way of geometry and aerodynamics–also an excellent option.

Maintaining everything that was excellent about the 2013 model, including stiffness, the upgrades on the 2014 model shed weight and improve aerodynamics as well as user friendliness. The frameset is one pound lighter. Trek’s Kamm Tail Virtual Foil (kvf) airfoil design, 13 per cent slim-down on the seat tube and down tube, integrated brakes and cockpit, as well as new storage options, push the limits of aerodynamic advantage.

Testing
In addition to wind tunnel testing, Trek designed and built a mobile sensor system to conduct elaborate yaw testing on actual Ironman courses with varying topography and wind effects. The result is a bike with maximum aerodynamic advantage. The original Speed Concept already established itself as a one of the fastest TT bikes on the market, so it’s remarkable that Trek has been able to squeeze any more speed out of the design. What are the savings in real time? Trek states that triathletes could save as much as 99 seconds in Ironman Hawaii and 148 seconds in Ironman Arizona after upgrading from the 2013 Speed Concept to the newest model.

The Improvements
One of the most extensive additions is the new aero bar system featuring a unique monorail design that is sleek and incredibly comfortable. The monoextension could not be cut on the earlier versions, but here it can be cut from the front of the bar for optimum fit. Additionally, a bottle cage can be mounted between the two armrests, which is one of the most advanta- geous places for fuel.

The new fork shape and the new SpeedFin brake cover help riders cut through the wind. The 9.9 features premium 600 Series oclv Carbon and carbon dropouts and is compatible with all electronic shifting (namely all current Shimano Di2 and Campagnolo eps drivetrains) as well as mechanical shifting. Although Trek uses proprietary handlebars, a steerer stub is available that will allow you to use any standard 1–1/8″ stem and handlebar combination.

Trek’s Adaptable Fit
Featuring the same geometry as the earlier version, the 9.9 allows for a range of arm rest pad placements. Increased knee clearance comes from moving the base bar forward by 4 mm. The brake levers were moved back 30 mm for smooth, out-of-the-saddle climbs. There are two available seat-post options: a 275 mm or a 335 mm. The 9 Series seatpost is reversible and comes in two offsets, 15 mm or 50 mm for an aggressive tri or uci TT legal position. (On smaller bikes the draft box needs to be removed in order to adjust the seatpost height). The 9.9 is available in Trek’s wide fit range: S-XL, as well as an XS model with 650c wheels.

Trek has simplified the process of fitting and building the bike by an hour by reducing the number of fasteners and tools needed.

Storage
In addition to the aero handlebar cage mount, the 9.9 comes with an improved rear Draft Box with increased volume to fit more gear. More practical and easier to mount and dismount than its predecessor, the new design makes you faster. My only suggestion would be to tape down the lid to the Draft Box, which popped open occasionally over particularly bumpy road or railway crossings. While it does have a pop in button to keep it locked down, a small extra precaution can’t hurt. Our test bike also came with the Speed Box storage option on the top tube that holds up to seven gels. Its rubber flap allows easy access while remaining secure.

Customize your Ride
Trek’s Project One Custom bike program speaks to the company’s commitment to hand-made, well-crafted design. Allowing you to personalize your ride with your choice of colour scheme, fit, styling, components, wheels or drive train, Project One definitely sets Trek apart in the industry. While we love the dynamic colour of our test bike, the matte or gloss black of the standard 9.9 are stunning options.

Conclusion
In truth, I’ve never ridden a bike that gave me such an overall feel of speed, agility, compliance and stiffness all in one. Perhaps most importantly to me was how comfort- able the bike is. The modifications in the aero and base bars seem to optimize setup, biomechanically allowing efficient access to power. Certainly a powerhouse high performance bike, the Speed Concept 9.9 is an investment, but one that is sure to change the triathlon landscape.