Thanks to the support of Triathlon Ontario and Bytown Storm triathlon the speedy twins Austen and Taylor Forbes had the opportunity to travel to Europe where they’ve been for the past month to train with The Wollongong Wizards which consists of  some of the best triathletes in the world. There they are experiencing firsthand what it takes to be at the top. With consistent weather and top-notch facilities, the twins are living, training and racing their way to success. Taylor Reid got the scoop on duo from Dundas, Ont.

Taylor Reid: How does European racing compare to racing in America?

Austen Forbes: Before coming to Europe we were constantly told that the European circuit was on another level of competitiveness. It was one of the big reasons for coming…Both of us noticed a much larger gap in cycling compared to the races back in North America as every athlete just loves to work hard and not sit in the pack. I have also never been in a race where 30 seconds was the difference between 10th place and a spot on top of the podium. Overall we believe it is an eye opener for any Canadian athlete that chooses to make the trip.

TR: Congratulation on your ninth place finish at the 2015 Holten ETU Triathlon Premium European Cup on July 4. How did that race play out?

AF: Holten was our big race of the trip. Aside from having most of the competitive Canadians going head to head it was also a very deep field, much deeper than you would find back in North America. It was likely the most competitive race we have ever been in and this fact alone made it very nerve racking. Most of our training leading into the race was specific towards Olympic distance racing. However, due to extreme weather warnings, our race was halved to a sprint distance. We both prefer the longer distance over the shorter and faster paced distance… Unfortunately we were caught at the back early on and it was very difficult to move through bodies to make our way to the front. That is something we’re looking to work on as it made for a slow transition that resulted in a 10 second deficit starting the run. With a strong first half I was able to establish myself in a top 10 position with not much changing in the back half of the 5 km, while Taylor gradually made up ground throughout the whole run setting himself up for a top 15 finish. This is my best result thus far in my triathlon career. 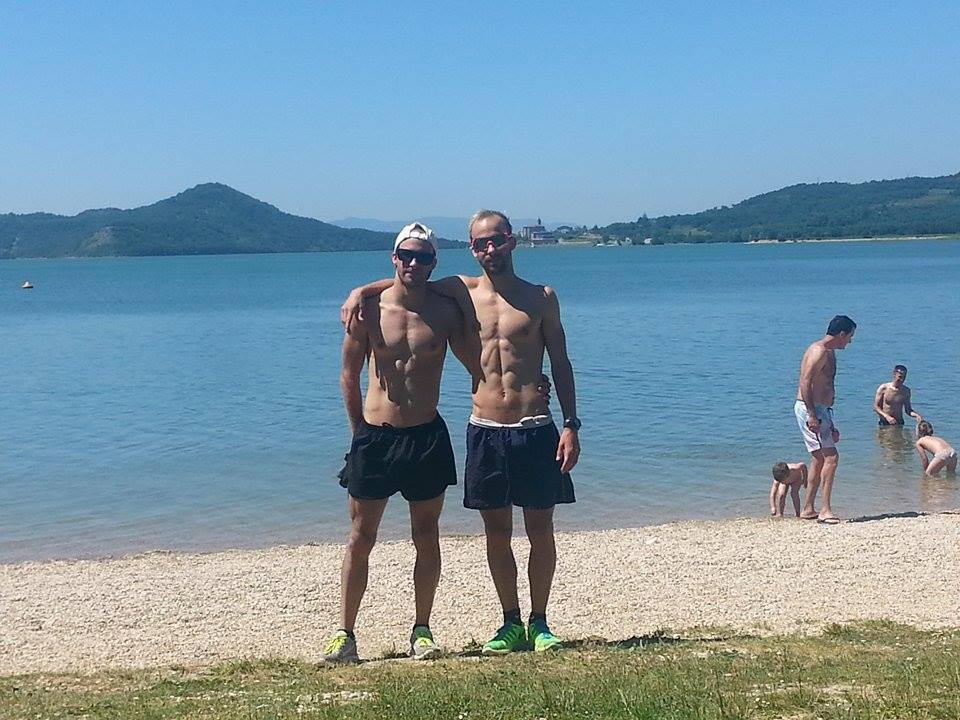 TR: You and your brother are at McMaster University, will you be racing cross country this year?

AF: Cross Country is always difficult to participate in as it occurs immediately after our lengthy triathlon season. However, cross country is something Taylor and I grew up with and we refuse to forgo the opportunity to represent our university and be a part of a great program. At least for the time being while completing our degrees. We are very excited to compete with Coach Paula Schnurr and the McMaster Marauders team in the hopes of medalling at the CIS championships.

TR: What are your goals for this year?

AF: Both our primary goal and focus is to represent Canada in Chicago at the U23 elite world championships. Taylor qualified last year.

TR: What is it like travelling and racing against your twin?

AF: We both feel that having a “close to equal as possible” training partner gives us a distinct advantage. We can draw motivation from each other when necessary and encourage one another during a hard set. We’re much like any other teammate except that we’re the one other person you want to beat but at the same time hope that they are successful in whatever challenge they come up against. For the most part we rarely ever train alone, the other twin is always there ready to rock and roll. Especially when times are low, having that support system is something money couldn’t buy. It’s a sacred bond shared by few and we feel that this besides anything else will help us reach that top level.

TR: Taylor, you were second at U23 Nationals last year, will you be coming back to race Nationals in Magog this year?

Taylor Forbes: I will be coming back to Nationals in Magog this year hopefully to improve on my performance last year, or at least perform just as well. However, I’ve been having a lack lustre season so far. With injuring my foot in my first race of the season in Sarasota the rest of the year as been an uphill grind. I finally had a decent race in Holten and plan to build off of that heading into Magog.

TR: What is your next race after that?