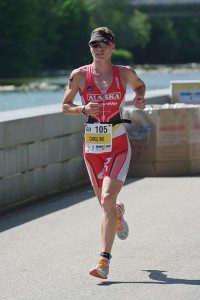 Following her split with TTB and coach Brett Sutton, Swiss champion Caroline Steffen has signed with first time coach, four-time World Champion and outspoken super star Chris McCormack. The pair made the announcement in a thorough interview on Slowtwitch today.

On her former coach, Steffen was gracious. She said, “Brett is the most self-sacrificing, extraordinary and sincere coach I’ve ever had. Brett’s ambition and joy for the sport triathlon is inspiring and thrilling at the same time….Brett and Team TBB gave me this chance because they believed in my talent which I will always be grateful for.”

When asked what led her to McCormack she explains that it was partly the fact that he is not an established coach:  “Chris is an athlete like me, it feels like he understands my thoughts and certain moves I do just better than any other coach I had. He considers and coaches me from a different perspective. We communicate regularly and with ease, plus the items I highlighted on my ‘wants and needs’ list were all ticked off when I considered Chris. The journey has been good so far and I am looking forward to what is ahead.”

Steffen is set to race the Abu Dhabi International triathlon this weekend where temperatures will be high and conditions challenging.