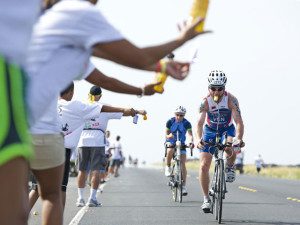 Here is the second part of Matt Fitzgerald’s feature on The Perfect Fuelling. If you missed the first part.

Although triathlons of all distances present a similar physiological challenge, there are some crucial differences, and these differences affect the optimal approach to fuelling for each distance. The rules of race nutrition apply to all triathlons, but the details of your fuelling plan must be distance specific.

Olympic Distance
What makes Olympic distance triathlons different from longer events? In a word: intensity. Because they are shorter than the half and full distance races, Olympic distance triathlons are contested at greater speeds. At higher intensities of exercise, the stomach empties more slowly. For this reason many triathletes find that they are unable to take in a lot of nutrition during short-course events.

In a 2010 study, researchers at the Australian Institute of Sport found that elite triathletes consumed a total of only 48 to 49 g of carbohydrate during Olympic distance triathlons. Elite athletes are not ignorant of the principles of effective racing fuelling. The reason they don’t take in more is that they can’t.

Lukas Verzbicas, the 2011 junior world champion is like most athletes. He cannot tolerate anything heavier than a sports drink during Olympic distance races and he drinks little or not at all on the run. If you think that’s odd, try drinking while running a 3:00 km and then think again.

At any given body weight, it takes the same amount of energy to complete an Olympic distance triathlon, regardless of speed. So if 48 to 49 g of carbs is enough to fuel winning performances in world and Olympic championships at this distance, it is enough to get you to the finish line as well. If you can comfortably take in more, then do so.

As athletes like Lukas Verzbicas have discovered, the difference in tolerable fuelling rates between the bike leg and the run leg is greatest at higher intensities. Be prepared for this discrepancy heading into Olympic distance triathlons and plan to fuel more aggressively on the bike and more conservatively on the run.

Half Distance
The most common cause of bonking in triathlons is depletion of muscle glycogen, the body’s limited carbohydrate- based energy source. Glycogen bonks are relatively uncommon in shorter triathlons but occur much more frequently at the half distance and above. The easiest way to avoid glycogen depletion at the half distance is to go slow. The slower you swim, bike, and run, the more your body relies on its virtually unlimited supply of fat for energy and the more glycogen is spared. But going slow is obviously a dubious solution in a race.

Fortunately, there are nutritional measures you can take to increase the muscles’ reliance on fat at higher speeds. One is fat loading. Research has shown that fat loading (five days of high-fat eating) significantly increases fat-burning and glycogen sparing during exercise and increases endurance. The ideal time to fat load is between three and seven days before a long race. Aim to get about two-thirds of your calories from fat during this period. After you complete your fat load, carbo load for the last three days before the race. This will restore your muscle glycogen supplies, which decrease during fat loading, without reversing the benefit of the prior fat load.

Traditionally, the last meal eaten before a triathlon – an early breakfast on race morning – contains a lot of carbs and not much else. But it may be more beneficial to eat a meal that contains more fat than carbs, especially before half events or longer. Muscles rely more on fat for fuel when exercise follows a high-fat meal. A recent study by Japanese researchers found that a pre-exercise meal that was 55 per cent fat and 30 per cent carbohydrate boosted endurance by 10 per cent compared to a traditional high-carb meal. But the high-fat meal only worked when subjects also consumed a high-carb energy gel right before the start of the workout. Give this a try in training first. 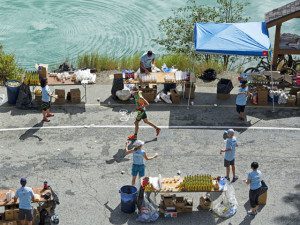 Full Distance
Hunger is one of two nutrition-related challenges that are much more common in full distance triathlons than in shorter ones. It’s difficult to sit still, let alone exercise for 10 or 14 hours without getting hungry. While exercise suppresses appetite, it does not kill it, and many triathletes experience hunger pangs during longer races.

Mid-race hunger isn’t necessarily a problem that demands action. Presumably, you are already consuming as many carbs as your body can comfortably absorb before you get hungry. Switching to solid food to address your hunger will not further increase the rate of fuel supply to your working muscles, but it will complicate your fuelling strategy and may increase the risk of gastrointestinal distress. So I recommend that you simply ignore your hunger and stick with liquid and semisolid nutrition unless it becomes a serious distraction. In that case, quell your rumbling stomach with an energy bar, chews, or a similarly convenient high-carb food you’ve used in workouts.

The second nutritional challenge of full distance racing is GI distress itself. While not unique to the distance, nausea, diarrhea and other GI symptoms occur more than twice as often in full distance events (31 per cent of the time) as they do in half distance races (14 per cent). Like hunger, mild to moderate discomfort in the tummy and bowels during an full distance race isn’t necessarily a problem to be avoided at all costs. Rather, it may just be a price your body has to pay for the taxing event. One study found that while Ironman participants who consumed the most carbohydrate were indeed more likely to experience GI discomfort, they also finished the race faster. The same study found that the top predictor of mid-race GI troubles was not carb intake but a history of mid-race GI troubles, indicating an innate susceptibility that nothing can be done about.

Nevertheless, many catastrophic cases of GI distress in full distance triathlons are unnecessarily self-inf licted by athletes who vastly overestimate the body’s tolerance for nutrition intake during such an event – and especially during the marathon. The most common site of race-wrecking GI episodes in these races is the start of the marathon, where the large amounts of f luid and energy that have been consumed late in the bike leg are suddenly churned around in the stomach by running. When planning and executing a fuelling strategy for full distance events, note that it’s easier to fix having consumed slightly too little nutrition than it is to reverse the mistake of taking in too much. You may need to do more than one full distance race to discover the optimal balance. In your first attempt, be content to take in 60 g of carbs per hour on the bike and as close to that same amount as you can on the run. That’s enough to give your performance a big boost but not enough to create a major risk for a race-ruining case of abdominal cramps. If all goes well you can be a bit more aggressive the next time. There’s always a next time.