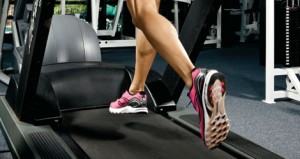 Can there be a better treadmill?

Though it seems unlikely that the dread of pounding off kilometres on treadmills in the dead of winter will reach a point where anyone prefers it to actually going outside, a professor at the University of Ohio thinks he’s making them a bit more bearable.

“If you’re running outside and you want to speed up or slow down, there is no button to push. It is the same with this new automated treadmill,” said Steven T. Devor, a professor of kinesiology at the University of Ohio where the treadmill was developed.

“So many people call it the ‘dreadmill.’ It is boring and monotonous. An automated treadmill makes the experience much more natural and you can just run without thinking of what pace you want to set.”

A runner can deliberately speed up and slow down the treadmill, moving towards or away from the front, though it also makes for a much more natural run. As you speed up a few kilometres into a run, as you normally would, you’ll move towards the front of the treadmill and it will speed up also, moving you back to the centre.

Right now the new sonar treadmill is only used for research. It’s being used to more accurately test the VO2 max of endurance athletes, though Devor hopes to commercialize the treadmill in the future.