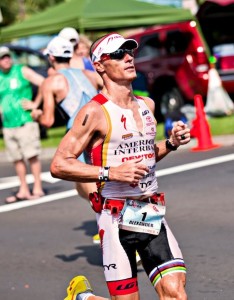 Could  Crowie race Kona in 2015? It appears he is at least contemplating it. The three-time  world champion has confirmed he will not race in Hawaii in 2014 but did suggest a potential comeback the next year.

“I still don’t think age is any excuse and I still think it is possible (to win Hawaii). My heart and lungs are still strong,” said the father of three.

“I just think I need to make it a two-year plan not a one-year plan. So I will definitely  not do Hawaii this year. I saw last year what it took out of me when I was run down. But it is a definite possibility for next year with a longer lead-in.”

The Australian also seeks to add a world title at a third distance: “I will also try for the world long-distance crown (4km swim, 120km cycle and 30km run) as well,” Alexander said.

Crowie will kick off his race season this weekend at Ironman 70.3 Auckland.

“I am in good form but how I go into my first race of the year I really don’t know,” he said.

“But I would be disappointed if I wasn’t in the first five.”