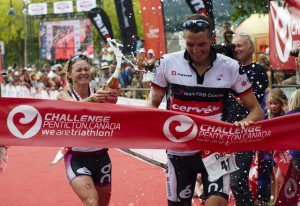 If you have been wanting to take part of the action in Penticton this summer but feared having to do the entire race, you now have a relay option. Challenge Penticton has announced the race based on athlete feedback following the inaugural race weekend last year.  The Challenge Penticton half relay  adds an option to the full distance, half distance and full relay.  Teams of up to three people can now register to swim 1.9km, bike 90km and run 21.1km. Challenge Penticton Canada seeks to “awaken the athlete in us all.” They are encouraging participation in the relay as a team building opportunity.

The inaugural half relay will be part of the festivities on Sunday August 24, 2014 allowing age groupers to race with an international field including world class pro athletes.  The Festival of Events week leading up to the race  has something for everyone.

For more information on the half distance relay or other inquires about Challenge Penticton Canada, please visit: www.challengepenticton.com