Challenge Family has announced the addition of several races to the 2016 race calendar. 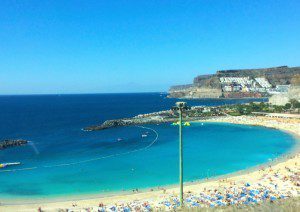 Challenge Mogán-Gran Canaria is set to take place on the largest of the Canary Islands on September 17, 2016. Spain has become an increasingly popular training and racing destination for pro and amateur triathletes around the world, so this addition of a new half distance race to Gran Canaria was a logical next step for Challenge Family.

“To date, the island did not have a triathlon race with a wide global reach,” said CEO Zibi Szlufcik. “In this sense, the current Government and the City Council of Mo­gán have decided to promote the annual ce­lebration of this race in an ambitious project to make Gran Canaria the European island of sport. Starting in 2016 there will be a celebration of a great sporting event each month. In September it will be the turn of Challenge Mogán-Gran Canaria, the first half distance triathlon to be celebrated on the island.”

The race course boasts impressive coastline scenery and triathletes will be challenged on the hilly bike and run courses. The temperatures of Gran Canaria in September are ideal for triathlon and the island has a rich culture making it a perfect destination race for friends and family.

Throughout December, Challenge Family added several Asian races  to their 2016 calendar, marking the brand’s global expansion in the upcoming year. The latest addition is Challenge Nusajaya, set to take place in Malaysia’s award-winning city. This is the company’s first Malaysian event, which will take place over the course of a triathlon festival weekend with the half distance race as the flagship event taking place on August 13th, 2016.

The course is fast and relatively flat, taking triathletes through a mix of tropical and urban scenery.

“As the first international triathlon event in the Challenge Family series to be held here, Challenge Nusajaya 2016 is expected to pave the way for many more such competitions. The city has been built to provide competition and training opportunities to athletes from all over the world and will continue to be improved to meet the international standards of a triathlon venue on a more permanent basis,” said Keld Kristiansen, event organizer of Challenge Nusajaya 2016.