Who would have thought that the little company Gerard Vroomen and Phil White (above) started in White’s tiny apartment in Montreal would one day become one of the most (if not the most) popular triathlon bike manufacturers in the world? More Ironman races have been won on Cervélo frames than any other manufacturer. But it isn’t just pros who are drawn to the bikes – Cervélo hasn’t just led the way in the bike count at the Ironman World Championship for the last few years … it’s dominated it.

Which might explain some of the buzz that’s been going on over the last few days as tri-junkies anxiously awaited the official launch of the company’s latest speed machine, the P5. Over the last few days White has been here in Fuerteventura introducing the bike that’s being billed as “Simply Faster” to journalists from around the world. Those journalists will be posting stories similar to this one at exactly 5AM local time – the minute the embargo on spreading this info is lifted.

So, is it worth all the hype? You betcha. There’s lots of detail to come below, but the most striking aspect of the new P5 is that White and the rest of the crew at Cervélo have managed to make a super-fast bike that’s moved away from the complicated setups we’ve come to see in the super-bike category over the last few years. The P5 is a rocket … but one that you’ll be able to take apart and pack up without having to make a trip to the local bike store. It’s also a bike that will allow you to get all the aerodynamics of the fastest bikes out there while also using your favourite aero bars, hydration systems, storage options and more – there’s very little that’s proprietary on this bike. I can’t think of a better slogan than the one Cervélo has come up with. “Simply Faster” describes it all – the bike is fast, but it uses lots of simple components and ideas to achieve that speed. To top it all off, the P5 comes with an incredible new brake from Magura that offers both a revolutionary design and incredible stopping power – something many aerodynamic bikes seem to lack.

There are four key areas that White uses to describe what differentiates the P5 from other super-bikes on the market.

Cervélo bikes have long been renowned for their aero shapes and designs. Internal cable routing is a given, of course, including for Shimano’s Di2. The P5 takes all the aero knowledge the company has gleaned over the years to the next level. There’s a longer head-tube chord and a thicker chord at the top of the seat post to ensure airflows past those areas in the optimal direction to reduce drag.

As aerodynamic as the frame is, what is possibly the most impressive aspect of the P5 is the way it’s been built to optimize stiffness and handling without sacrificing any comfort or adding any weight. The BBright bottom bracket and crank are beefed up and provide incredible power transfer, while the slightly thicker head-tube area offers outstanding steering and responsiveness. The standard-sized fork has been matched perfectly to that head-tube area, and is compatible with normal stems and headsets, which gives you lots of choice for set up.

The geometry of the bike has been designed to offer an incredible range of fitting levels. When I’m fitting athletes, I’ll often put those who aren’t looking for a super-aggressive position on a P2 rather than the higher-end P3 or P4 Cervélo models. I won’t need to do that anymore. The P5 will accommodate a much wider range for fitting – from the most aggressive aerodynamic to a more upright position on the bike. (The innovative aerobar helps with that, too – more on that later.)

The frame manages to provide all this performance and handling without sacrificing any comfort. – you are not going to feel a ton of road vibration while riding this bike. Using “Comfort Ply” technology the engineers have come up with the optimal and best carbon fibre weaves in just the right places to ensure a smooth, but stiff, ride, and have taken out material where it’s not needed.

The rear-cut out, another Cervélo mainstay, will accept all tires and wheel diameters.

Cervélo teamed up with 3T on the new aero bar that is used on the P5. It offers three macro height adjustments (High V, Mid and Low) and lots of micro adjustments (the adjustable pads have 75 – 115 mm of lateral movement and 50 mm fore and aft) to ensure that you get the optimal position on the bike. Since Cervélo pretty much pioneered internal cable routing, and did the aero design on these bars, it is once again a given that the cables are internally routed.

Cervélo’s testing has shown that a water bottle placed between the arms on an aero bar is actually faster than a position without one and the 3T bar actually has a water bottle mount in that position – something I’ll address again shortly.

Anyone who has ridden a bike with a hidden rear brake can probably concur that, while it might be the most aerodynamic spot for a brake, that setup doesn’t always make for great stopping power. That has all changed thanks to Cervélo’s partnership with Magura. The new hydraulic brake offers an incredible amount of stopping power and modulation. In keeping with the goal of making things simple, the brakes use standard tools for adjustment (and the rear brake is quite accessible – no taking off the crank to get at it). It’s a self-lubricating hydraulic system that uses mineral oil and, the word is, will require very little upkeep. Since hydraulic brakes are so new to us in the triathlon world, we’ll have to wait and see on the maintenance end of things, but I can tell you that the brakes work really well.

While the P5 is set up for any type of standard brake, I can’t imagine why you would want to use anything other than the Magura brake – it really makes that much of a difference.

Triathletes, especially those who compete in longer distance events, need to have lots of room to store stuff. Gels, bars, water bottles, spare tubes – all these need to go on the bike. It is kind of funny, when you think about it, how we spend crazy amounts of money for the most aerodynamic bike we can get, then add things like pouches on the top tube or huge water bottles on the handlebars.

Cervélo has now made it easy to get all that stuff on your bike without sacrificing any of the aerodynamic properties you purchased in the first place. There’s an option to add a water bottle on the handlebars, or in the classic down tube position. There are also placeholders for boxes right behind the stem (look for some P5 specific boxes to come from Torhans and other manufacturers) and even one down at the bottom of the frame where the water bottle used to sit on the P4. (It turns out that lots of people were finding that bottle a long reach and were using it as a storage compartment.)

There’s also a hidden compartment behind the bottom bracket for a Di2 battery, which you could also use for a tube if you aren’t using Shimano’s mechanical shifting.

Of course all of this technical stuff means nothing if the bike doesn’t ride well. How does the P5 feel on the road? The simple answer is excellent. You can genuinely feel the difference the improved stiffness makes in the steering and handling of the bike. It’s uncannily stable, too. My test ride was done in very high winds here on Fuerteventura (one of the Canary Islands that is renowned for it’s incredible winds) and I had no qualms getting down on the aero bars and pounding away. It felt great going into corners and accelerating out of them. Climbing both in the aero position and standing up is excellent – you can feel the stiffness in the bottom bracket coming to play here – so you can really power your way over the top of any hill.

I found the P5 has managed to maintain the comfortable cruising feel I liked in the P4, which means the bike feels good when you’re cruising for long periods of time on your aero bars. That’s critical for tri bikes, of course, but so many of the best bikes out there do that but don’t seem to be able to provide the more precise handling you want when you’re riding in a more technical situation. The P5 manages to combine the two – something you notice almost immediately once you’re on the bike.

Is there anything not to like? During my hour-long ride today I really didn’t come up with anything. I would probably tweak a P5 with some different components based on my own riding style (a slightly stiffer aero bar), but I would hazard a guess that most people will want to stick with the components Cervélo is offering on this bike – the fork, stem, aero bar and brakes that they’ve designed here on the P5 are all excellent.

What I like most about the bike, though, is the fact that it manages to combine all the aerodynamic qualities we’re starting to demand in our high-end tri bikes, but in a relatively simple package that will be easy to take care of and pack up, but also allows for lots of personal options, too.

The P5 will come in both UCI legal and Tri versions. Tentative pricing is (US$):

We’ll have more on the new P5 in our next issue of Triathlon Magazine Canada and here on the site. 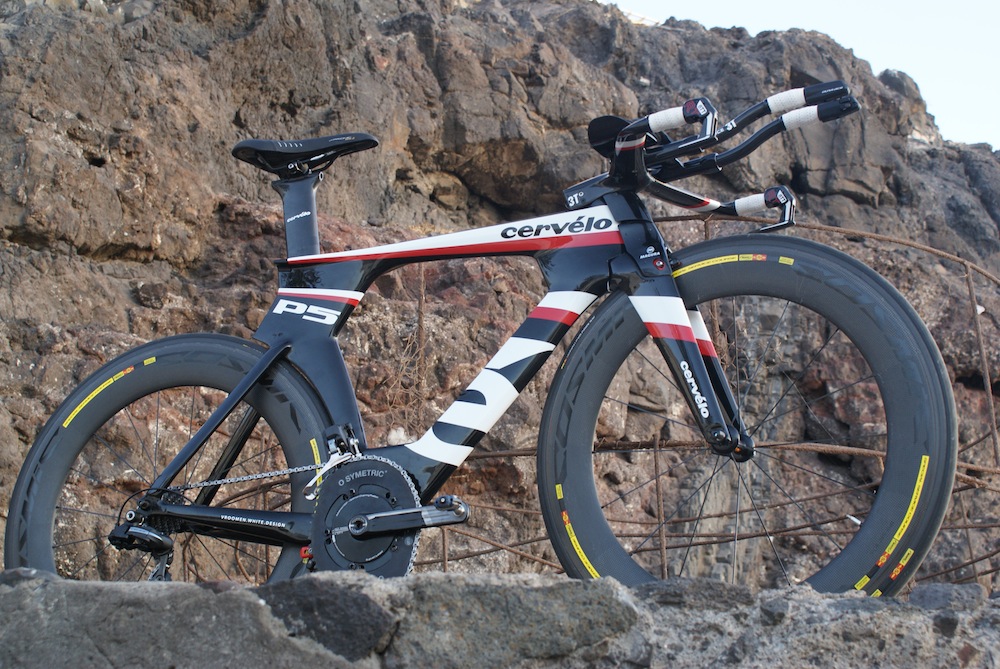 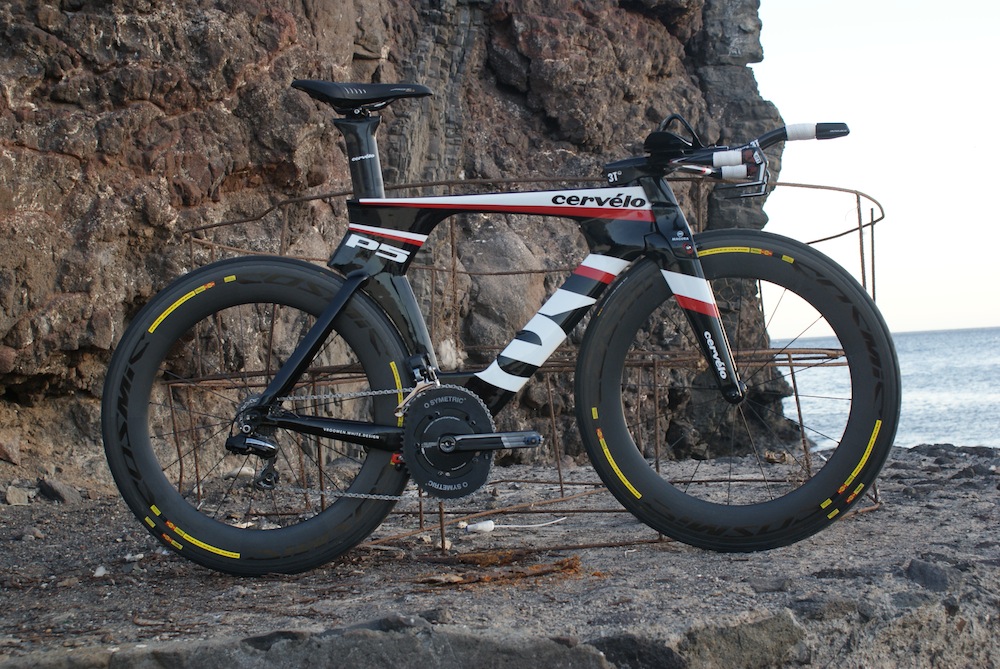 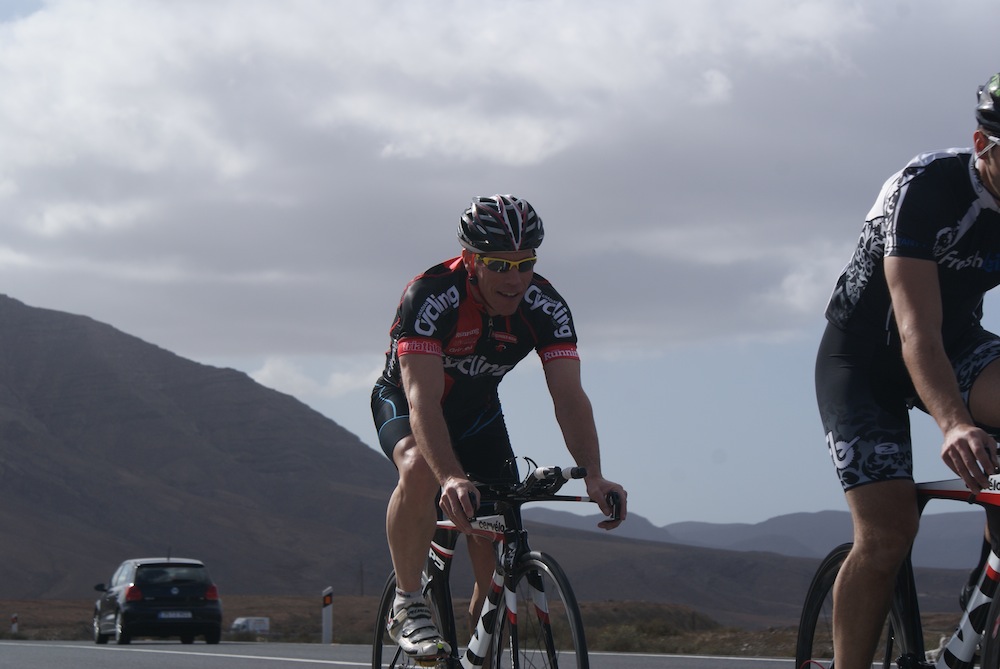 Kevin Mackinnon is the editor of Triathlon Magazine Canada