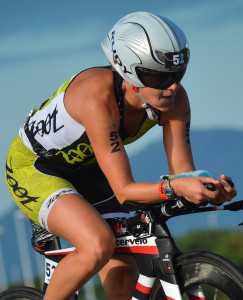 In 2014, Canadian Sara Gross was one of the few female triathletes with two wins on the Ironman circuit. Which also happened to be her first Ironman titles of her career. We recently chatted with the Mom and Phd pro triathlete.

TMC: You had one heck of a 2014 season with 2 wins on the Ironman circuit. What things made the stars align to allow you to pull off two victories? Do you feel you’ve finally tapped into your own recipe for success?

Sara Gross: Thanks! I definitely “did my time” in the Ironman world before finally winning! I’ve been a pro since 2003 and I think its safe to say that 10+ years of learning helped me finally get up another rung of performance. If we are going to talk about stars aligning, there are a number of things that contributed to this. My first coach Alister Russell taught me to run, and (now world-famous) coach Darren Smith taught me not only to swim, but also to aim high. Darren always compared his squad members to the best in the world, even when we were far from that. It was our job to figure out how to bridge that gap. That mindset continues to serve me in many endeavours.

Meeting my husband Clint and finally settling down in Victoria has been a big factor. When I was training and racing all over the world in the early years, it was fun, but I felt rootless. Stability helped a lot.

Another factor was figuring out that I am gluten intolerant, thanks to my naturopath Dr. Kim McQueen. My training improved overnight. I knew at once that it would pay off in the long run since my training is now a small percentage better than it used to be. Consistency is always the key to success, so consistently performing better in training had to eventually lead to better racing.

Around the same time, I figured out that I have a leg length discrepancy, thanks to my physio Katie Button here in Victoria. Now I wear a lift on the left side and that cleared up an SI joint injury that I was constantly having to manage. In addition, I created a “keep healthy” team for myself here in Victoria, including my chiro Dr. Rob Hasegawa and massage-guy Simon James, both at Good to Go Sports Therapy. I honestly don’t know how anyone trains hard and keeps healthy without a good team.

Lastly, with the help of coach Marilyn Chychota I was able to address my “strength weakness” in the gym and through specific work on the bike. She has helped me get that extra edge on the bike I was always missing. So if Alister taught me to run and Darren taught me swim, Marilyn is finally teaching me to ride a bike.

TMC:. What’s in store for 2015? Brazil again (you’ve clearly had success there), defend at Tremblant, or head back to Kona?

SG: My plan is to start the season with the 70.3 St. George in May. I will also do an Ironman in May but I am not sure which one yet. I have raced in Brazil six times and would love to defend my title but I will not go back unless they give the pro women a separate start. We get too caught up with the age group men and that makes the race unfair. I want to race on a clean race course.

In the summer I will race either Whistler or Mont Tremblant. The latter is a little too close to Kona to turn around and be ready to race against the best in the world in October. So if I have enough points, I might choose Whistler for that reason. Otherwise, I would love to race in Mont Tremblant again. It is one of the best races in the world. And I would know, I’ve been to lots!!

TMC: How do balance training, raising a young daughter, and having your hubby as your coach? How does that relationship work (obviously fine but most can’t handle it)?

Most days I really don’t know how I balance it. We have a really messy house.  I’ve had to get used to having a long ‘to do’ list and then just prioritizing each day. Clint (Lien) really takes care of a lot of ‘family’ stuff, like driving our daughter to school, doing our taxes, yard work, etc. He is the real hero in all this. He also has a wealth of knowledge of the sport and is one of the best motivators I know. For example, on the track the other night we were doing 800m reps. As we were about to start our last interval, Clint says; “Breathe, think of your successes, two, one, go!” Its his little ways of knowing what to say at the right time that make him a great coach.

For us, the coaching relationship is not a dictatorship. I’ve been doing this a long time, so we each bring a lot of knowledge to the table. We brought in Marilyn to help with some of the things we were missing and as a team, we seem to have found a winning combo.

TMC:  What’s the deal with quite a few of the top women triathletes being doctors or having PhD’s? Is there some correlation and your PhD in Ancient History and Religion has made you a better racer? How?

SG: I think the reason we see some highly educated people in triathlon is because the sport appeals to highly motivated, goal-drive people. I think we would see this same correlation if we polled age groupers as well. It’s just who we are as triathletes, driven.

In all honestly, I don’t think having a PhD helps me race well. I actually suspect I would be better off if I didn’t have such an active mind. It took me a long time to learn to shut off my brain and just train. I am also very slow to trust coaches and other advisors because I am always thinking too much.

TMC: I know you are starting a series of articles about Gender Equaltiy in Triathlon. How long has this been in the works, what areas will you be addressing and where can we read about it?

SG: My series on gender equality in triathlon is being published on witsup.com, a wonderful website out of Australia for women in triathlon. The introduction to the series is here.

The impetus for this project came when in September of 2014 the WTC decided to continue its current policy of having 35 slots for pro women and 50 for pro men at the World Championships. Since I know a thing or two about women’s studies and feminist theory, it struck me that this was discrimination based on gender and frankly, just wrong. It’s a question of equal opportunity. Nowhere else in elite sport do we find a situation where access to world championships is granted in proportion to participation numbers, male or female.

I started by reading everything I could get my hands on about Women in Sport. It’s a fascinating subject and its amazing how far we have come in just over 100 years. What was most striking, however, was that triathlon displays an amazing degree of gender equity compared with other sports. So I decided I wanted to write something cogent on the topic. I also wanted to use my research as a lens through which we can view the current inequalities being perpetuated by the WTC.

In the first couple articles I interview Mark Allen, Erin Baker and Scott Molina. I also had the good fortune of being able to talk to many of the great women who are currently in leadership positions within the International Triathlon Union. The ITU has, from its inception, been an equal-opportunity organization and this has had far reaching effects. In fact, my research found that the ITU’s high level of gender equality helped them get triathlon into the Olympic Games!

Right now I am reading about the advantages of gender equality for companies and corporations. I hope to be able to find some links to the sporting world. The need for diversity is a big topic in business right now.

Find out more about at SaraGross.ca