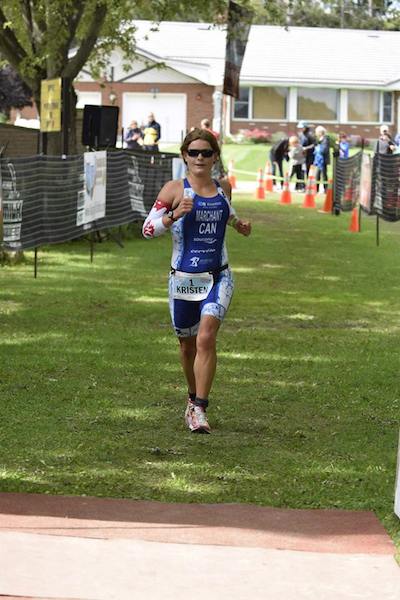 Newmarket’s Kristen Marchant finished fifth in her professional debut at Challenge Knoxville this past weekend. We caught up with her just after the race.

On her Challenge Knoxville professional debut and some pre-race jitters

Kristen Marchant: My Pro debut was tough but so much fun! For the first time ever I actually swam with other people, was in a chase pack of 4 on the bike (of course no drafting), and the run is another story (it was painful), but always something to work on. Nerves started the Monday before the race (almost a week beforehand), and didn’t really go away until we were warming up in the water 15 minutes before the race start. Then it was purely focus on what i needed to do to race well, regardless of what everyone else was doing.
On her undefeated streak coming to an end
KM: Ha! Yes, it’s over. Absolutely no hard feelings about losing to those great competitors. I am glad to be racing with those who are going to push me to be a much better athlete.
What will it take for her to take it to the next level?
KM: Swimming will always be a work in progress. Having not started swimming until I was 20, I am behind the eight-ball with regards to many of my competitors, and especially those who have come from ITU racing (where swimming is vitally important). Really, I need be good enough to stay on their feet, which is going to take a lot of work. Most importantly I need to be able to run well after a hard bike. The run felt awful (at Challenge Knoxville) and I know I am capable of running much faster than that- it is going to take a lot of practice to be able to do that after really going for it on the bike.
Living the life of a professional triathlete
KM: School is over, YAY! Full pro-mode for now. Hopefully, I can be successful enough in triathlon that I don’t need a ‘real’ job. Basically, this summer is giving everything to triathlon and then re-evaluating once the season is over.
What’s the rest of the season look like?
KM: A work in progress. I am signed up for Challenge St. Andrews at the beginning of July, and will have some MultiSport Canada races in there too. With the cuts to the prize money in the Challenge series it is becoming increasingly difficult to find races that are within driving distance.
Her new gear
KM: My new bike is awesome – Louis Garneau Gennix TR1. High quality bike and feels great to ride. The Blade carbon wheels are super nice, although it’s taking some time to get used to how deep they are. I am loving my Skecher’s shoes. I ran the ultras yesterday and my legs feel fine today, which is fantastic news as it means I can recover more quickly and get back to training. The best shoes I have ever worn.
Parting shots
KM: Thanks to everyone who is supporting me and cheering me on. I got good luck messages from people I didn’t expect to before my race on Sunday and it was super awesome!