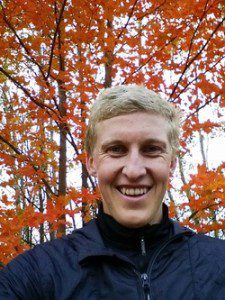 John Erik Rasmussen, an elite sprint and standard distance triathlete from Ancaster, Ontario, hopes 2016 is the year to make his Olympic dream come true. By placing emphasis on his running this year, he has found he’s getting faster in all three disciplines and looking forward to a strong year of racing on the ITU and WTS circuits. TMC caught up with him to learn more about what he’s been up to.
TMC: Have you started your 2016 training yet? How’s it going so far?
John Erik Rasmussen: My 2016 training is definitely well underway!  This past fall and winter, (my coach) Craig Taylor and I put a big emphasis on the run. I’m really confident that that work is going to really show itself this year.  Over the holiday break I went to Brome, Quebec with my girlfriend Geneviève Lalonde and it was great to be able to put in some big miles together on the rolling hills.
I’ve reduced my swimming and biking from previous years to help make some big jumps in my run, but I’m actually going faster than ever in the water and on bike at this point in the season. Our group in Guelph recently did a 2 km swim time trial and I broke 23 minutes. I’m more than a little excited to step up on the pontoon this year.
What races do you have planned for 2016?
I will open my season in Clermont and Sarasota with I anticipate a lot of other athletes from Canada will be there, too.  After the double-header, I hope to get a start at the ITU World Cups in Chengdu, China and Huatulco, Mexico. I’d like to make my debut on the WTS circuit and compete in Cozumel at World Champs.
If I have a really great start to the season,  I hear Brazil has a race this year? I wouldn’t mind adding that to my passport.
What are you most looking forward to in the triathlon world in 2016?

Rio! Regardless of which men earn their spot to compete, it’s going to be the biggest race of the year.  How can it not be anyone’s number one?Any specific goals for the year?
To compete in Cozumel World Championships this year and be part of the Rio 2016 process.

What does a typical training week look like for you?
I swim four times a week and bike four to five times.  Six out of the seven days I strap on my running shoes and I always fit in some double runs. Strength training has been another big component. I do it twice a week.  I don’t log my trips to the grocery store, but there are some good hidden kilometres in there too.

Are there any specific challenges you think you’ll face this year? How will you tackle them?
My biggest challenge is managing the financial pressure that comes with racing at the highest level.  I’ve already started to tackle that challenge by approaching local businesses for sponsorship. It’s important to be prepared mentally and physically for race day and let your performance simply be a demonstration of all the work you’ve done.  If you start to analyze what position you need to finish for prize money, funding, or selection criteria, all you’ve done is limited your own success.