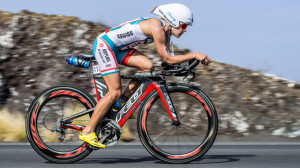 No surprises at the top of Triathlon Australia annual awards gala. Kona champ Mirinda Carfrae and Luke McKenzie won the awards for the men’s and women’s individual performances of the year. Carfrae broke the Kona course record last October and posted the third-fastest marathon run split of the day, outrunning all but two men.

Among the most prestigious awards given out was the Athlete’s Athlete award which was won by new long-course star Melissa Hauschildt. The winner is selected by other athletes.

For the last eight years Australia has had a men’s or women’s winner at the Hawaiian Ironman. McKenzie’s runner-up finish behind Belgian winner Freddy Van Lierde demonstrated that he clearly has what it takes to win Hawaii one day. McKenzie is one of the favourites for Sunday’s Ironman Asia Pacific championships in Melbourne.

Stephen Foster was inducted into the Triathlon Australia hall of fame. Foster was a contemporary of Greg Welch and Brad Bevan, who are already in the hall of fame. He was among the most competitive short-course racers in the late 1980s and early 1990s.